If you feel compelled to steal these, or want to leave your options open, you should at least add them to your list of things not to pose with, if there is any chance the pictures may be posted on Facebook. 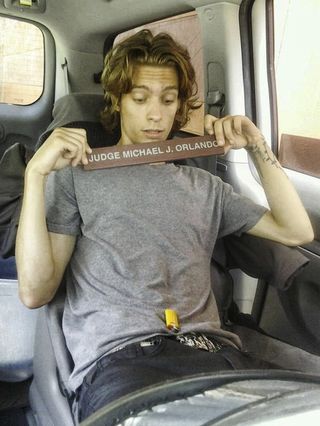 Dude! I totally just stole this! No way!

For a reason or reasons unknown, but possibly explained by the lighter and what may or may not be a baggie of contraband on his lap, 21-year-old Steven Mulhall stole Judge Michael Orlando’s nameplate from the door of the judge’s courtroom in Broward County, Florida. At some point thereafter, Mulhall posed for this picture with his prize, and his girlfriend appears to have posted it on Facebook. (They are only the latest in a growing horde of people who don’t seem to understand that by posting things on the “Internet,” you make them “public,” thus creating potentially incriminating “evidence.”) A tipster told police about the photo and gave them Mulhall’s name and address.

Adding to the stupidity quotient, Mulhall did this while already on parole for theft. “The nameplate is [worth] only $40, not that big of a crime, but what an idiot,” said Sheriff Al Lamberti. “Here he is flaunting it on Facebook. He violated the terms of his parole by stealing, from a judge no less. He’s got multiple convictions for petty theft, so now this is a felony.” Lamberti said the plate would be “returned to the rightful owner,” who, again, is a judge.

This might not be quite as brazen as actually stealing a judge’s gavel, something that has happened at least twice although only the more recent incident was actually captured by a courtroom security camera. But it is at least as dumb, possibly dumber, since the item stolen in this case was actually inscribed with the judicial victim’s name. Not sure we could conclusively determine which is dumber, so I’ll leave you to draw your own conclusions. Don’t worry, there really is no wrong answer to that question.

Does Size Matter? (Or, In Memory of Miss Wiggles)