But I can talk about other trials, and so let’s talk about one that just ended in a $7.4 million verdict against Bikram Choudhury, who it seems has somehow made umpteen gazillion dollars for being the first guy to think of turning up the thermostat while people do yoga. I mean, seriously. I had heard of “Bikram yoga” but still thought this L.A. Times paragraph read like satire:

Choudhury was born in Kolkata, India, and moved to California in 1971. He quickly became a prominent figure in the yoga world…. He styled himself as a yogi to the stars, bragging that Raquel Welch and Quincy Jones were among his clients and that he healed Richard Nixon of phlebitis. His yoga routine consists of a series of 26 poses, done over 90 minutes in a room heated to 104 degrees.

I guess it was the one-two punch of the Nixon reference and yoga description that caused me to snort.

Choudhury’s business model reportedly consists of charging people about 15 grand for a nine-week course that teaches them how to teach others. That’s fifteen thousand American dollars that people are apparently paying to be told “turn up the heat and stand like this” 26 times. That right there is Trump-University-level bullshit, my friends, the sort of thing that is both morally offensive and obviously necessary to real success in America these days. (The Ninth Circuit has at least ruled that “Bikram yoga” is not copyrightable, so there is that.) 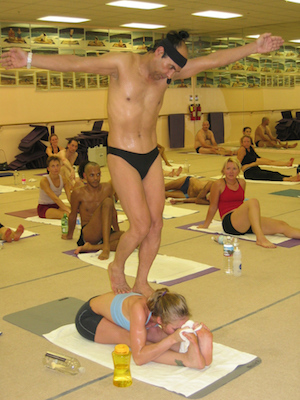 Anyway, this isn’t so much a yoga-scam rant as it is an anti-Bikram diatribe, so let’s get to that. The hot-yoga magnate has a side business, according to some, that involves harassing women. Well, more of a hobby than a business (he gives this away for free), say seven women who have sued Choudhury for sexual harassment. One of those cases has settled, five are still pending, and one just ended in a $7.4 million verdict against Bikram Choudhury.

On Monday, a jury awarded his former legal advisor, Minakshi Jafa-Bodden, $924,500 in compensatory damages, and it added another $6,471,000 in punitive damages yesterday. Now, it is possible to both (1) believe that his alleged conduct was utterly appalling and (2) raise an eyebrow at awarding somebody a million bucks for it, and I know this because I am doing both of those things right at this moment. It is also possible to both (1) believe that the punitive award is also too high (it’s seven times the damages) and (2) not care because why does this creep have money to begin with? And both of those are also happening. But that gets us to the jury-amusement part of the trial, which came about after Choudhury insisted that in fact, he has no money. Which the jury found to be a real hoot.

A major and necessary part of a punitive-damages proceeding is evidence about the defendant’s financial condition. Punitives aren’t compensation, they are meant to punish and deter. The award is supposed to be big enough to do that but not so big that it bankrupts the defendant, and so that’s why financial condition is relevant. According to the report, though, Choudhury failed to turn over financial records showing his net worth, which the plaintiff’s attorneys described as “considerable.”

He described it as nonexistent.

Choudhury said he didn’t know his net worth, but insisted that “I have no money.” (Those are not quite the same thing, which doesn’t mean either is true.) Enrollment in teacher-training “classes” is down significantly, his lawyers argued, which they said was because of the lawsuits but is probably also because of the copyright ruling, and is hopefully also because people are realizing it doesn’t take nine weeks to learn how to pose 26 ways and use a space heater. (But probably not that last one.) And Choudhury has legal bills and so forth, so really, he testified, he’s pretty much a pauper.

I am personally offended that after so many years in legal comedy, I do not get called in just to cross-examine guys like this, but such is life. According to Law360 (sub. required), that gift was given to the plaintiff’s attorney Mark Quigley, who got to ask things like, well, if you’re broke, “how do you buy the Ferraris and Bentleys and Mercedes[es]?” Because, as Choudhury had to admit, he has lots of those. “About 30 to 40,” in fact, and that doesn’t count the wife’s Bentley or the Ferraris he gave his kids. Then there was his “palatial home” in Beverly Hills and his Hawaiian condo, among other assets not typical of paupers. Pictures were of course shown to the jury.

I’m going to assume that the cross-exam consisted of 26 questions asked over 90 minutes in a courtroom heated to 104 degrees, and if it wasn’t it’s just another example of why I should be hired under these circumstances.

There was some juror smirking and chortling during the cross, when Choudhury claimed that the 30 to 40 luxury cars are not his anymore because he donated them to California to create “The Bikram Auto Engineering School for Children.” (Although a program like that might finally begin to address our state’s critical shortage of Bentley mechanics, sadly a spokesperson for Gov. Brown told the Times “no such agreement exists.”) This escalated to outright laughter during the redirect, when Choudhury apparently claimed that he had built some of the cars instead of buying them. “I am one of the most expert man in the world, recognized by the whole world to build cars,” he claimed. “I buy parts in the junkyards.” At this, Law360 reported, “several members of the jury quietly laughed; others shook their heads.” Maybe the redirect wasn’t such a good idea?

In post-trial interviews, several jurors said (and presumably all agreed) that they did not believe the defendant’s testimony, whether about his finances or the part about not sexually harassing women. “He’s disgusting,” and “you could tell he was lying” were representative quotes.

Still, he did cure Richard Nixon’s phlebitis. Nobody’s all bad.