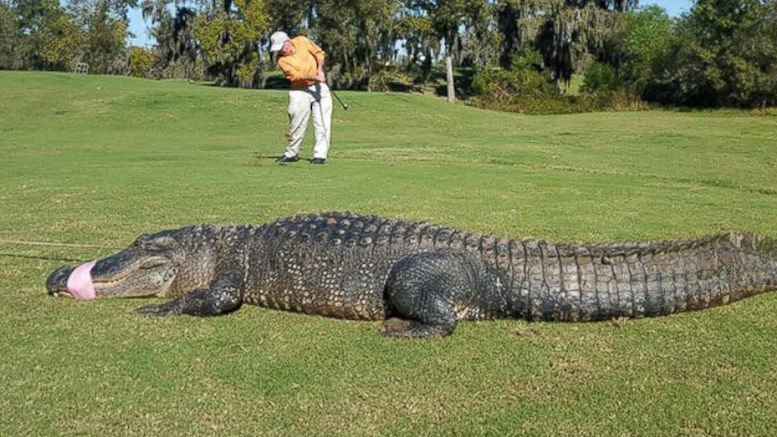 Gators are a hazard in Florida (image: Christy Kroboth)

Facts that may be important to your answer:

I guess that last one would probably be relevant only at the sentencing phase.

Several readers sent links to this news item (e.g. WPTV, Washington Post), but only Florida lawyer and former volunteer zookeeper Christopher Bussard seems to have been facing a work project so unpleasant he devoted otherwise billable time (.2 hours) to researching a ridiculous legal issue. Because I want to encourage that kind of conduct, and need the .2 hours myself, I am going to take full advantage of his research here as quoted below. Please consider the relevant parts of my disclaimer to extend to him for these purposes.

The 24-year-old accused gator-flinger has been charged with aggravated assault with a deadly weapon, a third-degree felony. (Had the gator hit someone, this would have been aggravated battery, but it didn’t.) Regular assault is a misdemeanor, so whether a weapon is “deadly” makes a big difference. And so, as you might expect, the legislature hasn’t defined that term:

The Florida statutes don’t define “deadly weapon” [Christopher writes]. They do define “weapon” (Fla. Stat. § 790.001(13)), but that definition is uselessly circular because it includes “or other deadly weapon.”

Totally useless. The definition is “any dirk, knife, metallic knuckles, slungshot, billie, tear gas gun, chemical weapon or device, or other deadly weapon except a firearm or a common pocketknife, plastic knife, or blunt-bladed table knife.” The word “other” suggests all the listed “weapons” are also “deadly weapons,” except that a firearm isn’t a “weapon” at all? Nope, this statute sucks.

So the courts have stepped in and defined “deadly weapon.” The best definition I could find was: “An instrument that will likely cause death or great bodily harm when used in the ordinary and usual manner contemplated by its design is a deadly weapon. However, an object can also be found to be a deadly weapon if used or threatened to be used in a way likely to produce death or great bodily harm. Whether an object is a deadly weapon is generally a question of fact to be determined by the jury.” Michaud v. State, 47 So. 3d 374, 376 (Fla. 5th DCA 2010) (citations and examples omitted). See also Brown v. State, 86 So. 3d 569 (Fla. 5th DCA 2012) (flimsy hollow plastic broomstick not a “deadly weapon”); Lee v. State, 100 So. 3d 1183 (Fla. 2d DCA 2012) (lengthy discussion of whether a shoe is a “deadly weapon”; ultimate conclusion: depends on the shoe).

So something is a “deadly weapon” if it’s designed as one, or if it isn’t but you could use it that way. But flimsy hollow plastic broomsticks aside, there would seem to be few objects that could be used as a weapon but could not be used in some way to produce great bodily harm, so this definition (which is common) tends to be applied broadly. In fact, I once made fun (respectfully) of the Ninth Circuit because it took the court 14 pages to explain why bare hands don’t qualify as “dangerous weapons.” (Chuck Norris aside.) But okay, this is the definition, so:

Let’s apply that definition to our infenestrated alligator.

Absolutely, but first let’s talk about “infenestrated.” This is a great word, even though it isn’t a word. As Christopher obviously knows, the word “defenestrated” does exist; “defenestration” is the act of throwing somebody out of a window. And we absolutely need a word for that. This one is almost always associated with the “Defenestration of Prague” in 1618, when some Protestants threw three Catholic lords out of a window and thus kicked off the Thirty Years’ War. Fenestra is Latin for “window.” My first reaction was that the word should be “exfenestrate,” not “defenestrate,” because the prefix de- usually means to remove, reverse, or turn away (like “defend” or “delegate”), whereas I think of ex- for expelling something (like Catholic lords out of a window). But de- can also mean “down,” as in “descend” or “depress,” and I suppose the downward sense is the most important one here. It would then make sense that there is no word for throwing somebody back up into a window. (“Fenestrate” is a word, but that means “to create windows in” something.) Here the alligator didn’t change elevation (materially), and the important issue is that it went in the window. So although “infenestrate” is not in the OED, it should be.

Okay, back to the legal issue:

First, was the alligator “likely [to] cause death or great bodily harm when used in the ordinary and usual manner contemplated by its design”? That question seems to have religious overtones. Cf. William Blake, The Tyger, in Songs of Experience (1794) (“Tyger Tyger, burning bright, / In the forests of the night; / What immortal hand or eye, / Could frame thy fearful symmetry?”) Assuming the courts mean a human designer, then we may conclude that this prong of the definition is simply inapplicable to alligators.

My only problem with that paragraph is that the poem doesn’t rhyme. But that’s not Christopher’s fault.

Second, was the alligator “used or threatened to be used in a way likely to produce death or great bodily harm”? [The suspect made no threats, which] leaves us with the main question: Is an alligator thrown through a drive-through window “likely to produce death or great bodily harm”? I honestly have no idea. I can say from personal experience that it’s safe to walk within a few feet of a sunbathing alligator—the only thing it’s likely to do is lie there. [See my disclaimer, supra.] But I’m not sure how the alligator’s recent experience of being thrown changes that equation. I can equally imagine the alligator becoming more surly, more cowardly, or just confused from the experience. My knowledge of alligator psychology just isn’t up to the task of resolving this question.

This is why God made expert witnesses.

And that’s why it’s a jury question. Florida courts expect the prosecution to put on evidence to prove the deadliness of the weapon, and to admit it into evidence so that the jury may examine it. Compare MJ v. State, 100 So. 3d 1286, 1287 (Fla. 4th DCA 2012) (holding prosecution failed to prove BB gun was a “deadly weapon” because it hadn’t been introduced for jury inspection) with Dale v. State, 703 So. 2d 1045, 1047 (Fla. 1997) (upholding jury finding that BB gun was a deadly weapon because “[o]f key importance is the fact that the jury had an opportunity to view the weapon first-hand.”). I would really like to see how the court would handle the admission of a live alligator into evidence and the jury’s inspection. Unfortunately for me—and for the prosecution—the report says the alligator was released back into the wild. That means (a) the prosecution probably can’t carry its burden to prove the deadliness of this particular alligator when thrown through a drive-through window, and, more importantly, (b) I’m not going to get to see a trial with a live alligator in evidence.

So the short answer to the question is: it depends on the alligator. This alligator is gone, so the charge won’t stick. As Christopher also points out, it doesn’t look like this particular alligator was very deadly, if this guy was able to possess and transport it without being eaten. Obviously that’s good news for the defendant.

The bad news is that it’s illegal to possess or transport an alligator in Florida because it’s a protected species, and he’s also charged with that. For that crime, deadliness is irrelevant.

Clever New Zealanders Self-Reclassify Cars to Save on Taxes