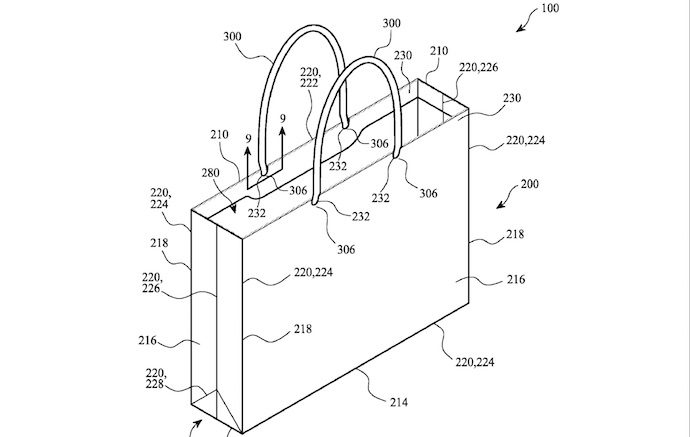 On March 17, Apple filed U.S. Pat. App. 2016/0264304 A1, for now entitled simply “BAG,” but presumably it will one day be called “iBag” or maybe “Apple Bag.” I assume the precise details and features of iBag will be a closely guarded secret until Tim Cook dramatically unveils it at some future Special Event, but the application offers some tantalizing hints.

Of course Apple doesn’t want to give away too much at this point, but reading between the lines, it looks like Apple sees iBag as occupying a place near the end of the retail supply chain:

The description that follows (in the DETAILED DESCRIPTION) section is more detailed, in a sense, but somehow doesn’t seem to offer any more actual details:

A couple of pages follow, along the same lines, but I should leave the detailed analysis up to bag experts.

So far as I can tell, the main thing that would distinguish iBag from previous bags is that it would be made of up to 60% “post-consumer content.” The application suggests that this is a lot, or at least more than in existing bags, so there is that. But the most important point to make here is that whoever came up with the phrase “post-consumer content” needs a good beating. If there’s a difference between that and “recycled,” I might semi-apologize, but I doubt there is.

Okay, there is a difference, I’ve now learned, but the term itself is still bothering me. It just seems like “post-consumer content” should refer to something that was previously contained within a consumer. Had someone figured out a way to make a bag out of that, it might be a real technical achievement but the practical applications would probably be limited.

Good Reason to Kill #6: Messed With Your Dungeons & Dragons Character

Amish Object to Putting “Mark of the Beast” On Cattle