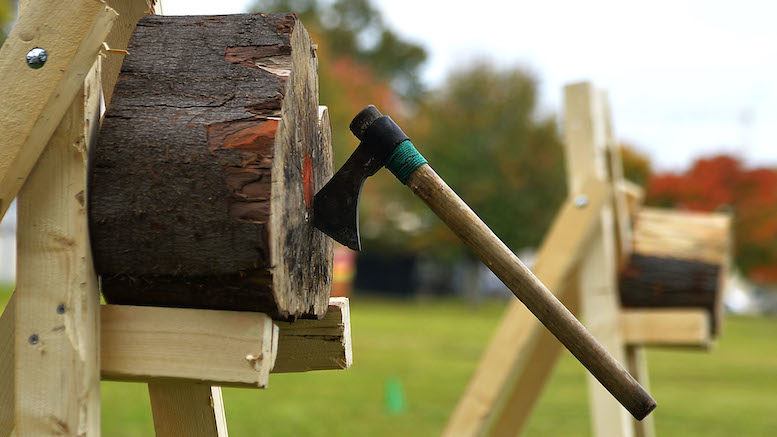 Well, as I predicted a while ago (see “Here’s to You, Future Plaintiff in Lawsuit Against Axe-Throwing Business” (June 14, 2017)), an axe-throwing business has been sued. Not for the reason I predicted, but hey, valid prediction.

In the lawsuit, filed in the Western District of Pennsylvania, the plaintiff accuses Lumberjaxes LLC (and three possibly related companies) of violating the federal Fair Labor Standards Act and state law by having a policy that 10% of all axe-throwing coaches’ tips go to the manager on duty. He says he worked as an axe-throwing coach for about five months, though his duties also included answering questions (presumably something other than “how do I throw this axe,” because that would be coaching), replacing “boards” (presumably those damaged by axes), and “cleaning the facility” (presumably not mopping up blood). The plaintiff alleges he “typically received tips,” but claims the managers took 10% of them.

This is a class action. It wouldn’t be unusual except for the job description, but one of the requirements for a class action is “numerosity,” which is a lawyer word for “having enough of something.” Specifically, you need a minimum number of potential class members to justify treating the case as a class action. If there are only, like, two, those people have to file their own lawsuits. There is no bright-line rule, but the minimum is generally between 40 and 100. Courts are split as to whether this applies in an FLSA case, but it does apply to the state-law claim.

This caused me to wonder just how many axe-throwing coaches these defendants employ in Pennsylvania.

The complaint alleges that there are “dozens” of potential class members, which really shouldn’t cut it. That is, if the number of dozens involved is two, that wouldn’t be enough. According to the complaint, the defendants have four axe-throwing venues in Pennsylvania. The statute of limitations is three years, but I’d still be interested to know how many axe-throwing coaches they have employed at these four venues during that time. If it’s really “dozens,” that seems like a lot, and makes me wonder just how rigorous the axe-throwing-coach training regimen is.

It doesn’t make me wonder that much, though. I threw some axes at a festival not long ago (never mind the details), and to be honest it wasn’t that hard. I did receive some brief “coaching,” which resulted in two of my 10 axes sticking in the target, and no serious injuries. It was fun (but since my coach only produced a 20% stick rate, sorry, no tip).

This report also made me wonder whether there have been any other axe-throwing-related lawsuits since we last addressed the matter. A Westlaw search for “axe-throwing” yielded only one opinion. United States v. Ballard, 2018 WL 6252604, at *22 (E.D. Pa. Nov. 29, 2018) (denying motion by defendant who argued improper contacts between judge’s law clerk and government agent; they discussed a possible axe-throwing excursion). But that wasn’t exactly relevant. (Westlaw did give me 19 other results that it said did not contain the search term but were “related”; most of them involved the insanity defense, so I’m not sure what that means.)

Searching news reports yielded some results, one of which apparently involves Lumberjaxes. The Triangle Business Journal reported last September that there had been a falling-out between the founders of “the Lumberjaxe axe club idea,” which apparently originated in North Carolina. According to the report, the founders were suing each other to establish who had come up with the idea of charging people to throw axes at things, as well as the Lumberjaxe name and “other intellectual property.”

In a press release last summer, the VP of an Ohio amusement company said he had not “seen any lawsuits, losses, or injuries related to axe-throwing,” though I have doubts as to how comprehensive his research had been. He did offer some tips about minimizing risk, one of which was “guests shouldn’t throw two axes at a time,” so please keep that in mind.

I did find one report of a lawsuit that may have involved an axe-throwing attraction, though that lawsuit seems to have blamed the thrower—and FOX News. See “Lawsuit: Fox & Friends Co-Host Threw Axe that Injured West Point Drummer,” Armonk Daily Voice (June 15, 2018). According to that report (and this video), co-host Pete Hegseth tried to fling an axe as part of a promo; the axe “sailed over the intended target” and hit the drummer in the arm. But FOX suggested the drummer had not really been injured, and if FOX says it, that’s good enough for me.

Finally, I also learned that axe-throwing appears in the regulations of one state, Kentucky, which has included it in a list of things that do not constitute “amusement ride[s] or attraction[s]” for purposes of those regulations. It’s an interesting list.

Section 1. Amusement ride or attraction shall not include:

Ky. Admin. Reg. 16.091 (emphasis added). This seems to mean these are all unregulated—that is, things like licenses, inspections, warnings, and so forth, are not required. That makes sense for some of these—I don’t see the need for the government to inspect my bubble suit—but others are a little more concerning. In any event, the bottom line is that to date I am aware of no personal-injury lawsuits against an axe-throwing business (or ninja course). I am still convinced that it’s only a matter of time.

To Boldly Snoop Where No Snoop Has Snooped Before