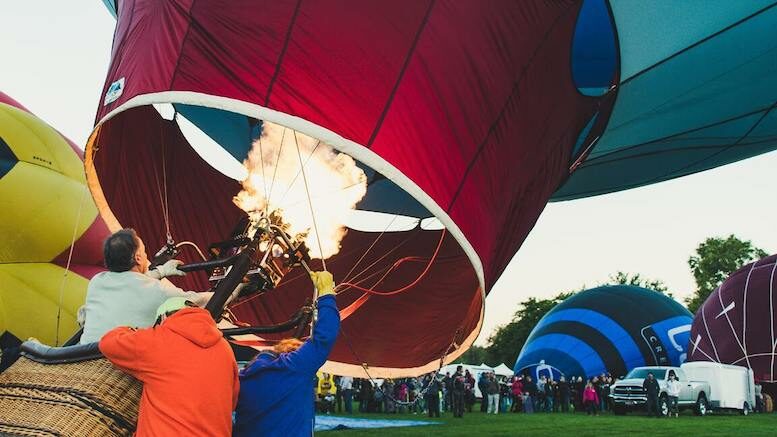 The alleged murder weapon being tested

It was hard to come up with an original headline for this because the ones already out there were pretty good. And that was true even though—or maybe because—they were in Dutch:

On the other hand, they were also good after I had Google translate them:

According to Google, dood = “dead,” schrokken = “startled” or “shocked,” and papegaai = “parrot,” hence doodgeschrokken papegaaien = “scared-to-death parrots.” (“Terrified parrots” is close, but not serious enough.) Also good are the weird formulations, in both languages, that made it sound like the article that follows would quote the parrots themselves (“Wij zijn niet roekeloos, awk!“). Sadly, that would have been impossible even if these parrots could talk, because they were dead.

According to the plaintiff, in fact, his parrots were literally scared to death by the defendant’s hot-air balloon, or, more specifically, a blast from that balloon’s main burner. This was in 2017, when the defendant and 21 other balloonvaarden were part of a ballooning competition that began near the town of Zundert (coincidentally, the birthplace of Vincent Van Gogh). The competition required them to follow a particular route. Each balloon carried a GPS device that logged its location and altitude during the flight—and yes, as you have already guessed, this turned out to be unfortunate for the defendant.

There were also a number of “prohibited zones” marked in the GPS system and on the competitors’ maps, where the balloons were required to stay above 1,000 feet. The scene of the alleged crime was Prohibited Zone 12, in which the plaintiff’s property was located. As the appellate court put it, on the morning of March 11, 2017, defendant “sailed through the exclusion zone PZ12 with his hot-air balloon.”

What happened next was disputed.1

After Defendant breached the forbidden zone, the plaintiff “immediately tried to call [defendant] on his mobile telephone.” (He Googled the name on the side of the balloon.) Defendant didn’t answer, probably because he was driving a balloon at the time. But the plaintiff reached him later and informed him that “as a result of the noise from the burners of the hot-air balloon and the proximity of the hot-air balloon,” two of the plaintiff’s parrots had died.

At approximately 9:50 a.m. that same day, Defendant paid Plaintiff a visit, and was shown two dead parrots. The next morning, Plaintiff reported the death of a third parrot, allegedly as a result of the same incursion. Plaintiff demanded more than 100,000 euros in compensation.

The defendant called his insurance company, which, understandably, asked whether there might be some evidence that three very expensive parrots had been scared to death by a hot-air balloon. No one seems to have thought of this until the insurer asked, because it wasn’t until the next day—March 18, a week after the incident—that a veterinarian visited the property and viewed the decedents. “According to his report …, he found three parrots that had died of stress, namely: a large yellow-necked Amazon and a male and female hyacinth macaw.” According to the most recent opinion (again, as translated by Google):

In the report drawn up by this veterinarian, all three birds stated [sic], among other things, that they were in a convulsive state, that the wings were slightly spread, and that they died of cardiac arrest as a result of an acute stress attack. With regard to two birds (a hyacinth macaw and the yellow-necked macaw), the report states that these parrots died on Saturday, March 11, 2017, and with regard to the third parrot (a hyacinth macaw), the report states that it died on Sunday, March 12, 2017.

Evidently skeptical of this diagnosis, the insurer denied coverage in an email, saying:

We regret to inform you that we have to reject your claims.

A causal link between the balloon overflight and the death of three parrots cannot be established, even with the documents sent.

Furthermore, it cannot be demonstrated that the balloon insured with us caused the damage, since at the same time five more balloons were flying in the immediate vicinity.

The stage was set.

First, could there be a causal link between a balloon overflight and the death of a parrot? Or, using human language, can a hot-air balloon scare a parrot to death? Is that even possible? And if so, did it happen here? Sadly, the opinions do not answer these important questions in any detail.

It is “generally known,” the lower court stated, that birds can be “startled by movements from above and by loud noises.” Evidence showed that a balloon’s main burner can make “a considerable noise” (they have smaller burners for this reason), and it was not disputed that this balloon was near plaintiff’s property. Nor, this court pointed out, was it disputed that the parrots were dead:

[Defendant] visited [plaintiff] after he landed and, he confirms, saw two dead parrots. [Defendant] states that he looked from a distance and that he saw two parrots lying motionless on the ground. The court deduces from this that these two parrots were dead….

Well, they could have been napping. Some parrots prefer sleeping on their back, I heard somewhere.

But the most important evidence was the vet’s opinion, and the vet did conclude that the parrots “died of cardiac arrest due to acute stress.” The defense contested this, pointing out that he didn’t examine them for a week, didn’t conduct a full “post-mortem examination,” and isn’t a trained pathologist. Also, the birds were disposed of after his visit, so no further inspection was possible. But the court found the defendant had waived these arguments by not objecting at the time. He was therefore stuck with the unfavorable cardiac-arrest opinion.

Also, the court seems to have held that the burden of proof on this shifted to the defendant because it was undisputed that he had wrongfully entered the Forbidden Zone. This sounds a little like what we would call negligence per se, or maybe res ipsa loquitur? (I’m not looking it up tonight.) In any event, the defendant lost on this question.

On the second question—was it his balloon or someone else’s—he had no better luck. A separate proceeding was held in the lower court on this, and this is where the GPS loggers came into play. The competition’s “scorer” testified and was able to show the court pretty specific numbers as to the location and altitude of the six balloons in the area at the time. How specific? Defendant’s balloon was the fifth to pass, at 8:13:04 a.m., and was about 50 meters away horizontally at an altitude of only 15 meters. Two others were also close but much higher. The court then clobbered Defendant with some science of its own: “Using the Pythagorean theorem (a2 + b2 = c2), it can be concluded that [defendant’s] hot-air balloon had a distance of 52.2 meters from the parrot cages, [H]’s hot-air balloon of 358.2 meters and [J]’s hot air balloon of 267.7 meters.” The Pythagorean theorem! Time to surrender, my friend.

Surrender he did not. On appeal, the court confirmed that because Defendant had been breaking the rules (the balloon-competition rules!), under Dutch law the court could assume the unlawful conduct caused the damage unless the defendant could prove otherwise. And Defendant gave it a shot. He wasn’t getting around the Pythagorean theorem. But far braver was his argument that, in fact, there were many other possible causes of the parrots’ demises. Among them: natural causes.

According to [appellant], it cannot be concluded … that the parrots died due to stress as a result of a reaction to an overflying hot air balloon…. The position in which the birds [were] found (namely: in a state of convulsion) is a result of a lack of oxygen. The parrots [could] also end up in such a state of convulsion for reasons other than an acute stress attack. Referring to the expert report of two specialists in avian medicine from the Faculty of Veterinary Medicine of the University of Utrecht, [appellant] argues that on the basis of the position in which the birds were found, there may well have been another cause of death, such as bird disease, poisoning, a calcium deficiency, an attack by a predator (polecat, cat, weasel, ermine, etc.), an acute infection, the presence of a pre-existing health condition or contaminated drinking water or feed.

Emphasis added. “Your Honor, it’s entirely possible these parrots had one or more pre-existing health conditions, like a calcium deficiency or hardening of the arteries or diabetes or maybe Creutzfeldt-Jakob disease or acute idiopathic birdosis, and these health conditions caused two of them to die independently but simultaneously and, in an unfortunate coincidence, at exactly the time my client’s balloon happened to be passing. Plaintiff can’t prove all those things didn’t happen, and therefore the defense rests.”

There also does not appear to have been evidence of a polecat attack.

The defense had better luck with the damages, which the appellate court cut roughly in half. Still, a 55,000-euro bill (plus fees and costs) should be plenty of incentive to keep your balloon well clear of any potentially expensive parrots. You never know when one will drop dead for unrelated reasons as you float by, and then you’ll get stuck with the bill.

1 The facts here are taken from the various court opinions rendered in this case. You can find them here. The link is to search results for case number 328186 at rechtspraak.nl, but you’ll have to translate the results. (You could also search for papagaai, but there’s evidently more parrot-related litigation in the Netherlands than you might think.) For a news report on the case in English, see “Balloonist is fined €68,000 for frightening three parrots to death,” which is funny but it’s still better in Dutch.