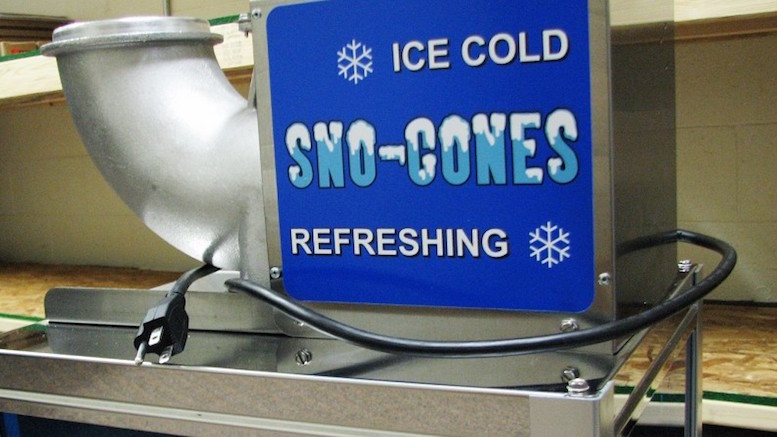 There have been plenty of examples already showing that large amounts of your tax money supposedly earmarked for the “War on Terror” end up getting used for purposes that are, shall we say, less than mission-critical. Back in 2006, we learned that $25 million in homeland-security money had been handed out in just one grant program with no controls at all, which resulted in $77,000 going to local fire departments to fund “puppet and clown shows,” and another $22,000 for an “educational robot.” An Indiana county got in trouble for using its $300,000 Electronic Emergency Message Boards, intended to notify the public about things like evacuation routes, to advertise the volunteer fire department’s charity fish fry. This is just the local stuff, not counting the umpteen billions spent on naked scanners that don’t do any good.

Also, the war in Iraq.

Still, it is something special when a homeland-security grant is used to buy a snow-cone machine.

Actually, thirteen snow-cone machines, one for every county in Michigan Homeland Security Region 6. Region 6, as you almost certainly don’t know, covers 13 counties in western Michigan including Clare, Isabella, Montcalm, Muskegon, Newaygo, and other areas also near the very top of al-Qaeda’s hit list. According to the Greenville Daily News, the Board of Commissioners in Montcalm noted that they had been presented with a snow-cone machine, and while they probably appreciated this unexpected gift, they did inquire as to whether the $900 treat-maker was an appropriate use of homeland-security dollars. (Apparently, another county – anonymous for now – requested the machine, and somebody thought that was such a good idea that all 13 counties got one.)

The Daily News was able to confirm that the the snow-cone machines were funded by a grant from the Michigan Homeland Security Program, but nobody seems to have had a good answer for the “appropriate use” question, surprisingly enough. Two ways to go in that situation: (1) admit it was a mistake or a bad decision, and fix it; or (2) insist that yes, there is an entirely valid purpose for incorporating an Arctic Blast Sno-Cone machine into your anti-terrorism plan.

“It is used to attract people so they can be educated and prepared for homeland security,” [Sandeep] Dey said from his office in Muskegon. “More importantly, they (homeland security officials) felt in a medical emergency the machine was capable of making ice packs which could be used for medical purposes.”

You didn’t really think anybody would pick Option One, did you?

Dey is the executive director of the West Michigan Shoreline Regional Development Commission, which oddly is in charge of Homeland Security Region 6. He did not dream up these explanations just now, though, because they are the same ones contained in the state grant program’s “Allowable Cost Justification” form that was filed back in May. According to the Daily News, that document (which sadly was not available online) says the machines would be used to “make ice to prevent heat-related illnesses during emergencies, treat injuries and provide snow cones as an outreach at promotional events.”

The director did try to do a little damage control, apparently feeling a little heat-related stress himself at that point. “He said the … request would not have been granted by itself, but was approved because it came with other homeland security equipment.” I’m not sure what that means. Maybe with every dozen radiation detectors you buy, they throw in a free snow-cone machine? Dey also contended, evidently, that they are budget-conscious and making the hard choices, saying that “one county requested a popcorn machine, but that request was denied.” Because that would just be ridiculous.

“I don’t like the term ‘snow-cone machine,’ because it sounds horrible,” said Montcalm County Emergency Services Director David Feldpausch about the term that appears right on the side of the machine. “When you look at it as an ice-shaving machine and its purpose, it makes a little more sense.” With Option Two thus in full effect, Feldpausch had one more argument. According to the report, “Feldpausch [also] said the machine could be useful at the scene of a large fire.”

To be fair, I don’t think he meant to be taken literally there. Obviously you’d have to combine the full power of all 13 Arctic Blast Ice-Shaving Anti-Terror Machines to deal with a really large fire. The good news is that Region 6 is now equipped to handle that. And terrorism.

Court: Not Prejudicial to Feign Sleep During Defense Argument