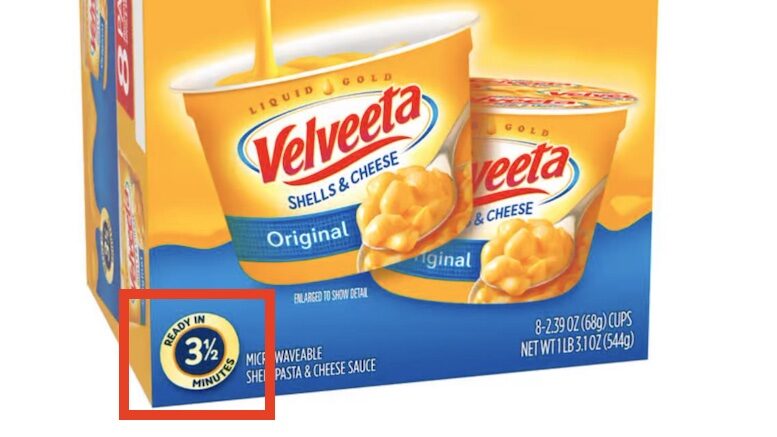 Don't you believe it

I probably drone on too long in most of these articles, but this time I don’t think I have to say very much. This is one of those complaints that speaks for itself. And what it says is stupid.

In this lawsuit, the plaintiff accuses Kraft Heinz Foods Company of misleading her and other consumers as to the time it would take them to make one (1) serving of Velveeta Shells & Cheese. As you can see above, according to the package, the product can be “READY IN 3 1/2 MINUTES.” But according to the plaintiff, that is a dirty lie.

You see, the instructions on the back of the package explain that—you know what, I’ll just quote the complaint (weird capitalization in the original):

7. Finally, they should “STIR IN contents of cheese sauce pouch.”

8. Defendant then notes that “CHEESE SAUCE WILL THICKEN UPON STANDING.”

You see, of course, where this is going. If the label says the product will be “ready in 3 1/2 minutes,” BUT it must be MICROWAVED for 3 1/2 minutes, yet ADDITIONAL STEPS MUST BE TAKEN BEFORE THE PRODUCT IS IN FACT READY, then by definition READINESS IN 3 1/2 MINUTES IS IMPOSSIBLE. The paragraphs that follow explain the logic in careful steps, apparently for the benefit of those readers who may be as dumb as this plaintiff claims to be:

9. Consumers seeing “ready in 3 1/2 minutes” will believe it represents the total amount of time it takes to prepare the Product, meaning from the moment it is unopened to the moment it is ready for consumption.

10. However, the directions outlined above show that 3-and-a-half minutes is just the length of time to complete one of several steps.

11. The label does not state the Product takes “3 1/2 minutes to cook in the microwave,” which would have been true.

13. Consumers are misled to expect the Product will be ready for consumption in a shorter amount of time than it really takes to prepare.

Plaintiff alleges that she, too, believed that the product “would take 3-and-a-half minutes total to prepare and be ready for consumption.” Had she known the shocking truth, she would never have bought the product, and she demands a remedy.

The plaintiff may believe this one is a slam-dunk, though more likely the hope is for a quick and easy settlement. She’s represented by a New York lawyer who is becoming notorious for filing ridiculous cases like these, and not just because some of his cases are dumb enough to mention here. See also, e.g., “Plaintiff Alleges ‘Heart of the Himalayas’ Is in India, Not Pakistan (It’s in Nepal)” (Oct. 22, 2021); “‘Hint of Lime’ Case: It’s not Crunch Berries, But It’s Close” (June 16, 2021); cf. “Reasonable Consumer Would Know ‘Crunchberries’ Are Not Real, Judge Rules” (June 2, 2009) (not one of his, and one that will be hard even for him to beat). He’s probably gotten some quick payouts, but Kraft shouldn’t pay him a dime on this one.

This case will get thrown out on “reasonable consumer” grounds, just like the Crunchberries (and Froot Loops) cases did (though it’s still not quite as stupid). Broad as these state consumer statutes are, a defendant can still argue that a case should be dismissed if “no reasonable consumer” would behave as the plaintiff claims she did. Now, you might think the problem is that the directions—which are on the outside of the box—make entirely clear that it’ll be more than 3 1/2 minutes before you can get this into your piehole. But many courts have held that consumers can’t be bothered to, you know, turn the box around and read the back. Okay. But setting that aside, here the plaintiff is complaining about additional steps that would take, and I’m just estimating here, not longer than 10 seconds.

Ooh, but what about the time needed for the sauce to thicken? Sorry, the label just says it will thicken upon standing, not that this is a required step prior to full readiness. Doesn’t count.

So what we have is a person saying that had she known she would be required to devote 220 seconds, not the promised 210, to the readying of one (1) serving of Velveeta Shells & Cheese, this 4.67% difference in the number of seconds required would have been a dealbreaker. Not likely. And this of course assumes a reasonable consumer would interpret “ready in 3 1/2 minutes” as a scientifically precise and accurate measurement of the time required instead of what it obviously is: an estimate. Hey, what if you microwaved it for just 3:15 instead? I bet it would be plenty hot, and then you would have saved time overall. Sounds to me like someone may have gained some seconds of life they didn’t pay for and needs to reimburse Kraft for the difference.

Even dumber than the consumer-fraud claim is the one for breach of the implied warranty of merchantability, which requires a product to be “fit for its ordinary purpose.” That is, the plaintiff is saying that this mac & cheese was utterly worthless for its ordinary purpose of eating because it took a little longer than expected to make. Sorry, I don’t know what your expert mac & cheese witness is telling you, but no.

I realize now that it has probably taken you longer to read this article than I suggested it would, but I hasten to point out that I made no specific promise as to duration or word count, and that despite its length the article remains fit for its ordinary purpose … whatever that might be.

Associates Not Pleased With Memo on “Presentation Tips for Women”