DSUWI (Driving Something Unusual While Intoxicated) 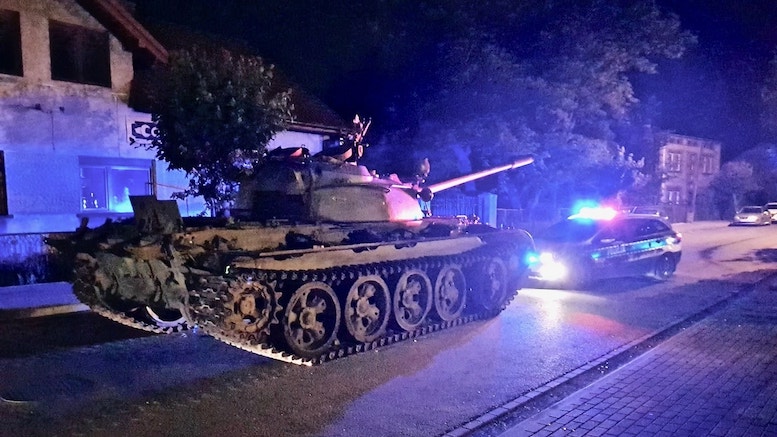 "Do you know why I stopped you?" (image: TwojePajeczno.pl)

What? Yeah, of course they do. Absolutely. No question about it. I mean, some of these cases do require legal analysis, but this isn’t one of those cases. Nope. The headline was really more of a rhetorical question, to be completely honest with you. Yes indeed, DUI laws do apply in this situation.

Might be an issue with enforcing them. But they apply.

This particular case reportedly happened on Thursday, June 13, in Pajęczno, a small town in south-central Poland. (It was reported in Newsweek, which got the story from a local newspaper, Twoje Pajęczno.) According to Wikipedia, Pajęczno is about 40 kilometers north of Częstochowa, if that helps you at all; it’s the county capital; and it has a population of just under 7,000 people. And here’s everything else it’s known for, at least according to that Wikipedia article:

On 14th June 2019 a drunk man drove through the town in a T-55 tank and was arrested shortly after.

The current mayor is Dariusz Tokarski.

According to the reports, the tank was being transported on a trailer, though it’s not clear where it was headed. T-55s are still used by quite a few countries around the world, but apparently not in Poland, so it’s possible it was en route to a museum or something like that. In any event, the trailer was damaged somehow, the tank was removed from it, and the trailer was taken away to be repaired. The truck driver apparently passed the time by getting drunk, and there was nothing else to do, and one thing led to another, and so by about 9:30 pm on the 13th police were getting reports that somebody was driving a tank through town.

Luckily for police, the tank was already parked when they showed up. Two men were standing next to it, namely the driver and one passenger. The driver was arrested and charged with driving under the influence, and as noted above there is little question that such laws would apply to someone who was operating an armored vehicle at the time. Given the nature of the vehicle—in this case, a 36-ton main battle tank—additional charges may also be forthcoming if you do that. Here, for example, the man was also charged with creating “direct danger of a catastrophe in land, water, or air traffic.” Whatever that means, exactly, it carries an eight-year prison sentence, four times the penalty for driving a regular vehicle while drunk.

The reports say the driver also did not have insurance.

The T-55 tank is the most dangerous of the unusual vehicles we’ve discussed, the (fairly distant) runner-up most likely being the motorized bar stool mentioned here. That wasn’t likely to crush anyone, but it could reportedly hit speeds of up to 38 miles per hour, so, also somewhat dangerous.

The Freedom of (Ridiculous) Information Act at Work

“My Turn to Drive,” the Passenger Said. But It Wasn’t