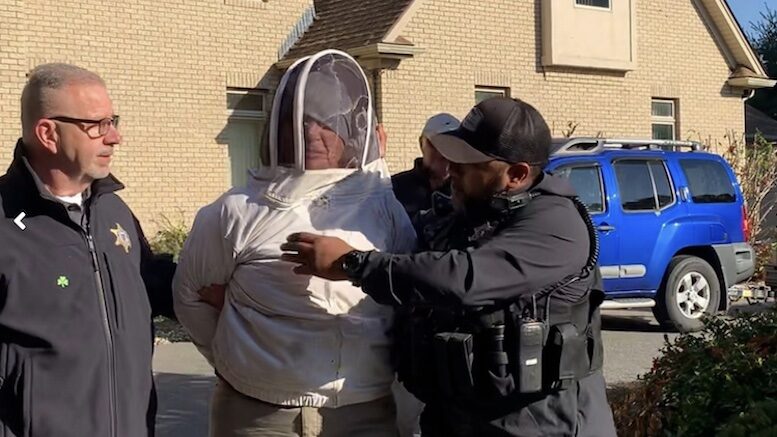 Certainly the Hampden County Sheriff’s Department did not hesitate to bring “dangerous weapon” charges against a woman they say tried to attack deputies with a swarm of bees on Wednesday, apparently in an effort to stop an eviction. According to reports, the 55-year-old woman drove up to the house towing a trailer stacked with bee boxes, which she then began “trying to open.” Reports disagree about exactly what happened next.

According to one, deputies tried to stop the woman but “backed off” after “agitated bees began circling the area.” That seems to mean she managed to get at least one box open, unless these were bystander bees that observed the commotion and decided to get involved. According to this same report, the woman then smashed the lid of another box and flipped it off the trailer, “causing the bees to swarm” and sting “several officers and bystanders.” But another report says “the boxes fell over” during the initial scuffle, and it was this which “released” an unspecified number of bees “on” the deputies and bystanders. That report doesn’t mention any actual stings. So the reports are contradictory.

But all the reports agree that the woman then put on a beekeeper’s outfit before making further efforts to deploy further bees. At that point, deputies arrested her. She was subsequently charged with three counts of “assault by means of a dangerous weapon,” four counts of “assault and battery by means of a dangerous weapon,” and one count of disorderly conduct.

Most states include a list of what they consider “deadly” or “dangerous” weapons in their criminal statutes, but Massachusetts doesn’t, leaving it up to the courts to decide. Whether a particular thing qualifies as a “weapon” at all, and if so whether it is “deadly” or “dangerous,” could in some cases pose difficult questions. (In other cases, not. See, e.g., “Ninth Circuit Grapples With Whether Bare Hands Are Weapons” (Mar. 23, 2010)). But Massachusetts courts have largely avoided this dilemma by holding that pretty much anything (that isn’t a body part) can be a “dangerous weapon.”

The courts have recognized two categories of “dangerous weapons”: (1) things that are designed to kill or seriously harm people and are therefore considered dangerous per se, and (2) things that are not designed to do this but could do it if you tried hard enough. See, e.g., Commonwealth v. Gebo, 188 N.E.3d 80 (Mass. 2022). In Gebo, a woman was charged with two counts of “assault and battery by means of a dangerous weapon” after she hit her husband of 55 years (1) on the arm with a plastic chair and (2) in the head with a ladle. Neither of these items would appear on most states’ deadly-weapon lists. The jury acquitted her of the ladle-assault charge but convicted her for the chair, even though the ladle seems to have done more serious damage. The state’s highest court affirmed. “Ordinarily,” it conceded, “a chair is an innocuous object.” But here, it held, the evidence (of a one- by two-inch “abrasion” that “bled profusely” because the victim was on anticoagulants) was sufficient to affirm the jury’s finding that “the chair as used” was a “dangerous weapon” within the meaning of the statute. (The same court had previously held that a sneaker could be a “dangerous weapon” when used to stomp on someone, so the result is not really surprising.)

Put another way, unless the “weapon” used could not possibly be capable of inflicting serious harm no matter how hard someone tried, in Massachusetts a jury is free to convict under these statutes. And given the breadth of this “definition,” it seems very likely that “bees as used” could qualify as “dangerous weapons.” The same court has held that the use of a dog during a robbery makes it an “armed” robbery, even if there was no evidence that the dog in question (a German shepherd) had been trained to attack people. Commonwealth v. Tarrant, 326 N.E.2d 710 (Mass. 1975) (armed-robbery case). The victim could reasonably have believed it might be trained to attack him, and that was enough in that context.

Of course, bees can’t be trained (to the best of my knowledge), but if somebody threw a hive at you, it’d be reasonable to expect the bees inside to get royally pissed off and mistakenly blame you for their trauma. Even one bee could potentially inflict serious injury, at least if the victim is allergic, and they tend to attack in groups anyway. So under Massachusetts law, since it is possible, or at least not impossible, to use bees to inflict serious harm, it’d be up to the jury to make the decision in this case. (If it gets to that point, of course, it’s not going to help the defendant that she put on a beekeeper’s outfit, presumably because she was worried about being stung by her own bees.)

On the topic of serious harm, it did not surprise me to see the sheriff’s claim that not just one but “several of the staff on scene are allergic to bees,” so that the suspect “put lives in danger” by her actions. This claim might even be true, but it isn’t likely. I don’t know how many people Hampden County uses to serve an eviction warrant, but based on the number of assault charges (seven), it seems reasonable to infer there were seven people present (plus the rogue beekeeper). According to the internet, about five percent of the population is allergic to bee stings, so statistically it’s not likely that even one of the seven has such an allergy, much less that “several” do. (One deputy went to the hospital briefly for an “increased heart rate,” but the reports don’t say he was stung.) Unluckily for the suspect, under Massachusetts law I don’t think this fibbing matters.

For an equally ridiculous analysis (but one for which I at least had some help), see “Is an Alligator a Deadly Weapon?” (Feb. 12, 2016) (concluding that under Florida law and the facts of that case, probably not).

Did Congress Forgive All Your Debts by Passing a Law Nobody Knows About Because of 9/11?

Does the Excessive Fines Clause Apply to Parking-Meter Violations?

Does the Constitution Say You Can Shoot Socialists?