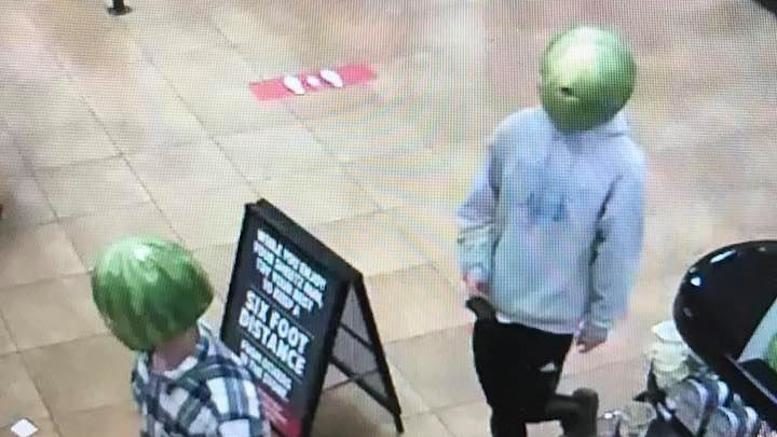 There isn’t much information available about this incident, but several sources have reported on the recent arrest of one of the miscreants pictured above. The watermelon helmet-masks they created may have protected against the coronavirus, but didn’t work so well against the police.

According to the Daily Progress, on May 6 the two people shown here entered a Sheetz convenience store in Louisa, Virginia, and committed some sort of larceny. The watermelons may have protected their identity to some extent, but the problem with disguises like this one is their tendency to raise your public profile before, during, and/or after the event, making it more likely that members of the public may remember seeing you. That seems to be what happened here. The report says that the local police department posted the image on its Facebook page and asked for help locating the two “melon-heads.” This worked, according to the Daily Progress, which said “[c]omments on the Facebook post were full of photos from other people who apparently had seen the duo elsewhere in town.” The post was later updated to say an arrest had been made, something a dispatcher at the local sheriff’s department also confirmed.

The dispatcher provided few other details, however, and also apparently declined to give his or her own name. I couldn’t find any mention of this incident on either department’s Facebook feed, but I can think of at least three explanations for that: (1) one or both deleted any posts they had made about it (maybe not having expected this to go viral?); (2) Facebook is a strange and fearsome jungle I can barely navigate; or (3) this didn’t really happen. The lack of details is a little suspicious, but the Daily Progress seems to be a pretty reliable source and its story specifically says they confirmed it with the local departments. So at least for now I am going with explanation number one.

All the reports say that only one arrest had been made as of Monday. The Progress said it was unclear whether police were still looking for the second melonhead, but its report contains all the contact information you need if you are able to help.

I just now remembered that I actually have a “Bad Disguise” category, although as I mentioned the last time I used it, about five years ago, I haven’t been very consistent about the numbering. As I also said then, that is partly because I hadn’t expected there to be more than one person who would try to disguise himself by wrapping his head in duct tape. (This was back when I still had at least some hope for the species, you understand.) Nor have I gone back to fix that, if it needs fixing, so let’s just call this #9.

It bears some similarity to #7, Bucket on Head, but that guy forgot about the need for eyeholes.