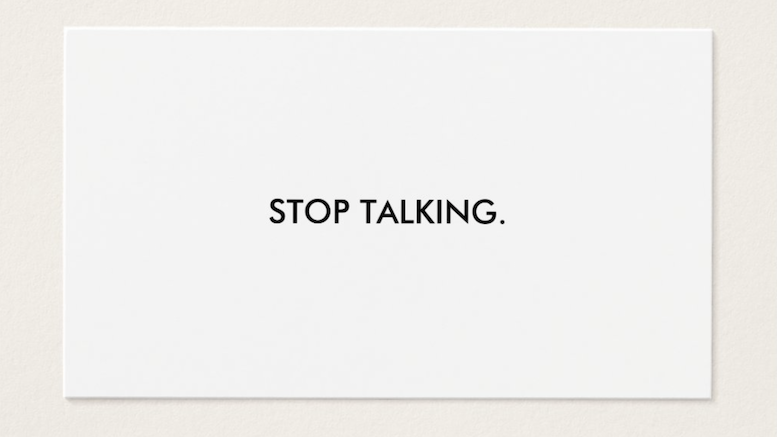 Have you considered this option? (image: zazzle.com, where this card is available)

It may sometimes be important to make at least some kind of public statement in a high-profile case. But have you considered not doing that? Are you sure you’ve considered that option fully? I strongly suggest you do.

And if you must speak, consider the option “I have no comment,” which of course is a comment but not one you will get in trouble for. More experienced attorneys may deploy the more advanced version, “I have no comment at this time,” which suggests you might have some currently non-public information that is favorable to your client that you will reveal at some indefinite time in the future (like when you come up with some). Or perhaps utter a request that the public “not rush to judgment,” which suggests the foregoing a little more strongly. But in my view, your default should be silence or a simple “no comment.”

Then you won’t say words like those in the headline, which were emitted yesterday by the Tucson attorney representing a now-former-police-officer who was terminated for use of excessive force. Because the officer used force on Monday night and was an ex-officer by Tuesday, you might think the allegations were fairly egregious. And you would be correct:

The man killed, 61-year-old Richard Lee Richards, was in a motorized wheelchair at the time and had brandished a knife, but had his back to the officer at the time of the shooting….

According to [Chief] Magnus, the [store] employee said he caught up with Richards as he fled the store and asked for a receipt for items he was carrying, to which Richards brandished a knife and replied “Here’s my receipt,” before continuing toward the Lowe’s garden-section entrance.

[Officer] Remington followed after Richards across the parking lot and then into the nearby Lowe’s parking lot.

As Richards continued, he apparently also said that if police wanted him to drop the knife, they would have to shoot him.

At that point, Remington was joined by another officer, and both followed Richards toward the Lowe’s.

Both yelled for Richards to stop as he reached the garden-section entrance before Remington fired his weapon nine times, striking Richards in the back and side, before he fell from his wheelchair.

That report from the Arizona Daily Star also has a video of the incident, which you can also see here at CBS News, as part of a clip in which at least one commentator does his best not to rush to judgment. And I should say that according to the defense attorney, the video that has been released so far is “only about 20%” of the incident. But since the existing 20% shows his client shooting a guy in a wheelchair nine times in the back as he rolls away, it seems unlikely that the other 80% is going to hold any surprises.

In the ex-officer’s favor, the man was armed with a knife, was disobeying commands, had said that he would not give up the knife without being shot, and was rolling into a garden center in which he might conceivably have posed a threat to someone even less mobile than himself. On the other hand, the man was armed with only a knife, was in a wheelchair, was rolling slowly in the other direction, and does not appear to have been immediately threatening anyone at the time he was shot.

He was apparently suspected of having stolen a toolbox, but even factoring that in, these don’t seem like great facts for arguing that the use of deadly force was justified.

The Tucson Police Department seems to agree with that analysis, having fired the shooter within 24 hours of the incident. “I am disturbed and troubled by Officer Remington’s actions,” the chief said, calling this use of deadly force “a clear violation of department policy,” which evidently frowns upon shooting invalids in the back. “Unconscionable,” said the mayor, and that’s also bad.

What about possibly using a Taser? you may be asking. Was that an option? No, according to the defense attorney. His client “did have a Taser,” he admitted, “but in his mind, he couldn’t use it because he didn’t feel he had the proper spread to deploy it, with the wheelchair between him and Richards.” Thus, his client “had no non-lethal options.” At some point during the speaking of those words, he might have begun to regret his decision to speak in the first place. If so, that didn’t happen soon enough, because “my client might have hit the suspect’s wheelchair instead” is not something that’s going to help. This is one reason I suggest silence or “no comment” as your default rule.

Also, if you speak, you may be presented with questions, and here are just a few of the questions that might be tossed out in this case:

I could probably come up with more, but those seem like enough to make the point.

Tip: “BOOM SHAKALAKA” May Not Be Best Response to Contempt Petition

“Tell You What, Slick. This Profession Doesn’t Need You.”