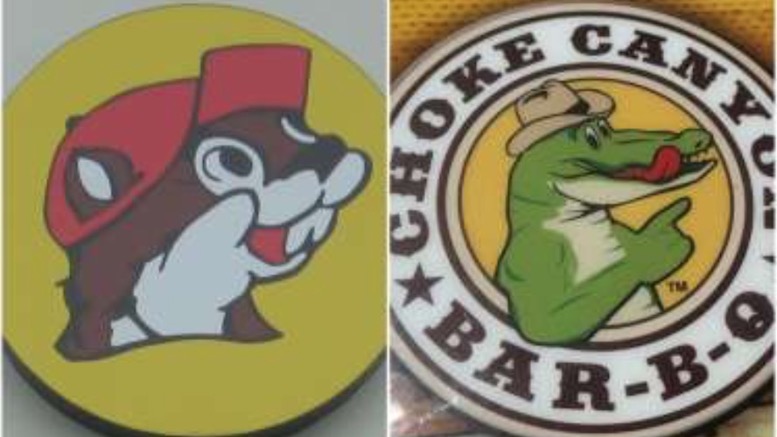 The beaver is on the left

Would you confuse the two? Because a Texas jury held last week that you probably would.

Last Tuesday, the jury held that the alligator logo (on the right) was too similar to the beaver logo (on the left), and so the company that runs Choke Canyon travel stops will have to pay Buc-ee’s Ltd. for trademark infringement. That seems odd, given that the two logos look nothing alike. True, each one features a cartoon animal that is oriented in generally the same way, but they are different animals that are different colors, and have other differences that you can see for yourself. Or maybe you can’t?

“It’s absolutely not about a beaver versus an alligator,” insisted Buc-ee’s general counsel, although it kind of seemed like it was. “There are more than 10 similarities between the two marks that we presented to the jury in this case,” he continued, which was also puzzling because the “number of similarities” isn’t the question. It’s whether there is a real likelihood that consumers would confuse the two marks, and that seems pretty unlikely here because, you know, they don’t look similar at all.

Choke Canyon was certainly perplexed by the verdict, especially since it presented survey evidence showing that more than 99 percent of consumers asked about the two logos said they would not get them confused. The defense expert surveyed 300 people, which isn’t a huge sample, but it looks like Buc-ee’s didn’t present any survey evidence at all. Not that it’s required, but here it does seem to confirm the optical evidence that the logos don’t really look similar.

“I’m surprised that Buc-ee’s won,” said Chris Schwegmann, a trademark attorney that the Houston Chronicle asked for comment. “I haven’t seen any of the trial evidence,” Schwegemann said, “but I just can’t see how any reasonable juror could find a likelihood of confusion between those two logos. One is a beaver, the other is an alligator. One has a ball cap, the other has a cowboy hat. The design of the logos is different and the alligator logo even has the name of the store directly on the sign, further diminishing any confusion between the two stores.”

Both the logos have the color yellow in them, though, and also white and red. And the animals are facing in the same general direction, I guess, although the ‘gator is looking at the viewer, and the beaver is looking at who knows what. More importantly, I think Buc-ee’s is probably looking at an appeal.

Can the Holy Spirit Participate in Jury Deliberations?

“MURDER” Tattoo Update: It’s to Be Turtlenecks in August

When Questions From the Jury Are a Bad Sign