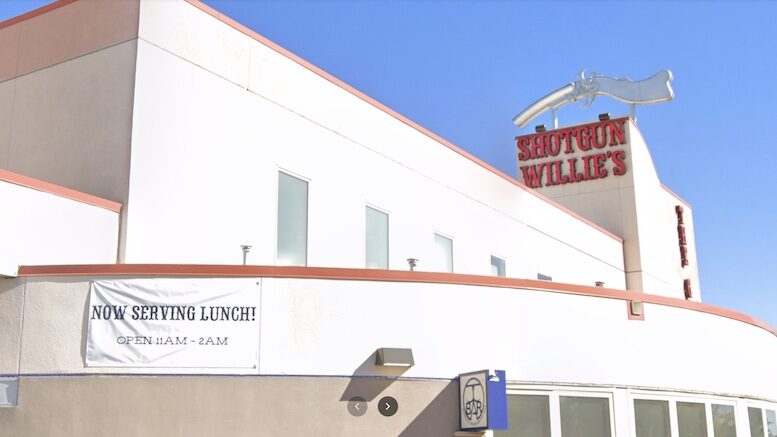 That’s the headline in the Denver Post article about this incident, which happened at a Denver-area strip club, but I feel justified in using it because I would very likely have arrived at the same result independently. Cf. “Plaintiff Who Visited ‘Pissed Off Pete’s’ Alleges Beating by Pete” (Jan. 20, 2008). There’s a Fourth Amendment doctrine that says basically the same thing, and while I can’t remember what it’s called right now I think my argument is pretty solid here.

Of course there is nothing inherently funny about any death, depending on who died and, in extremely rare cases, how, but there is no reason to think either of those factors applies here. Both deaths are tragedies. It is, however, “kind of weird,” to quote one of the lawyers involved, that a long-pending trial involving a death at Shotgun Willie’s has now been delayed by another death at Shotgun Willie’s.

I initially assumed this was because the plaintiffs in the wrongful-death case had learned of a recent similar incident and the parties were arguing about whether it was similar enough to be admissible. No. What makes it weird is that the person who recently died at Shotgun Willie’s was one of Shotgun Willie’s own defense lawyers.

The trial involves a 2019 incident in which a 48-year-old man got into an altercation that “led to a chase through Shotgun Willie’s.” I’m sure you’ll agree that any chase through a strip club has at least the potential to be funny, but this one wasn’t because the man died after being tackled by a bartender. According to the Post, the plaintiffs say the bartender used a chokehold, while the defense says the man had a bad heart. Trial was set for November 7.

But on October 1, one of Shotgun Willie’s lead trial lawyers died while visiting the club (specifically, while sitting in his car in the parking lot), for reasons that are not entirely clear but don’t seem at all similar to the 2019 case. Last Friday, the defense moved for a continuance, and the judge ultimately agreed.

The plaintiffs’ lawyers, as I guess they were probably obligated to do, argued that the case should go forward as scheduled. “This case is now ripe for trial. It must move forward,” one argued on Friday, incorrectly using the word “must.” He continued, “justice delayed is not justice served,” another thing people say when they don’t have an actual argument. His assertion that Shotgun Willie’s has “several [other] attorneys” who could handle the trial was at least an argument, but it didn’t prevail here.

This is not to say the judge was happy about the further delay, and in fact I infer he wasn’t from the report’s statement that he agreed to the continuance only after four hours of argument and “several minutes of deliberation[ ], in which he sighed deeply, held his head in his hands and rubbed his face repeatedly.” But he granted it nonetheless.

Later in the hearing, the judge reversed an earlier order granting the club’s attorneys permission to take jurors to Shotgun Willie’s during the trial (to inspect the premises, of course). The plaintiffs successfully argued that this might be misleading because there would be “no way to replicate the sound and lighting” of the night in question. Seems like you could get it to be substantially similar, but I can think of other reasons why having jurors visit during business hours might be, as the judge acknowledged, “a mistake.”

Court: Not Prejudicial to Feign Sleep During Defense Argument