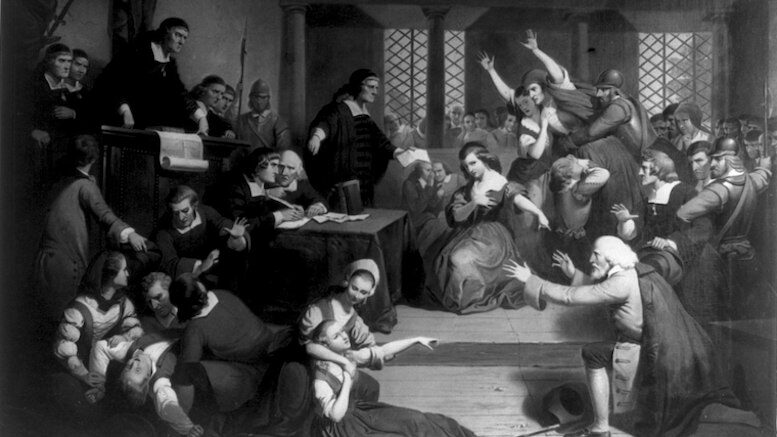 The Salem witch trials, where justice was certainly done

According to Courthouse News Service, the budget bill signed Thursday by Massachusetts Gov. Charlie Baker contained a provision exonerating Elizabeth Johnson, Jr., who was convicted of witchcraft 329 years ago. Johnson was convicted during the notorious Salem witch trials of 1692–93, which yielded results that some skeptics have called questionable. She was apparently the last of those convicted at Salem to be officially exonerated.

The Massachusetts legislature has addressed the unpleasantness several times, beginning as early as 1708. (“Early” from our point of view, that is. A bit late for those hoping not to be hanged.) An act passed that year exonerated three people, according to this source. In 1711, another act cleared about two dozen more. Maybe not surprisingly, this act does not question whether witches and/or devils were actually present in the colony, and in fact blames those “Evil Spirits” for causing the proceedings to get out of hand. But also, it says, “[s]ome of the principal Accusers and Witnesses in those dark and Severe prosecutions have since discovered themselves to be persons of profligate and vicious conversation,” which is a very 18th-century way to say the Salem witch trials were ass-deep in perjury.

These acts cleared most of those who had been convicted (and even provided a little compensation), but not all. Somehow, as this source puts it, “the names of seven persons clearly within the intention of the act were overlooked and omitted.” This was most likely because the act was responding to a petition that certain specific people (or their heirs) had filed, and the other seven just didn’t join for one reason or another (possibly being dead with no one to represent their estate). Johnson, who was still alive only because the governor had commuted her death sentence, applied separately but her petition “came too late.” That seems to be where things stood for the next 240 years or so.

In 1957, the legislature was persuaded to revisit the issue. It passed this somewhat grudging resolution, which stated as follows:

Whereas, [certain] persons may have been illegally tried, convicted and sentenced by a possibly illegal court….; and

Whereas, [the Legislature] is informed that certain descendants of [the people who may have been hanged] are still distressed by the record of said proceedings; therefore be it

Resolved, … that such proceedings, even if lawful … were and are shocking and the result of a wave of popular hysterical fear of the Devil in the community, and [the Legislature] further declares that, as all the laws under which said proceedings, even if then legally conducted, have been long since abandoned and superseded by our more civilized laws[,] no disgrace or cause for distress attaches to the said descendants … by reason of said proceedings….

Resolve relative to the indictment, trial, conviction and execution of Ann Pudeator and certain other persons for “witchcraft” in the year sixteen-hundred and ninety-two, Resolves, Chap. 145 (1957).

Just in case anybody missed the multiple disclaimers there, the resolution’s last paragraph makes absolutely clear that this doesn’t give anybody the right to sue just because certain persons may have been wrongly convicted in a possibly illegal court. (The statute of limitations might have been a problem anyway.)

Notice, however, that the 1957 resolution only mentioned one person by name, Ann Pudeator. Did the “certain persons” include all of the other six? This remained unclear.

In 2001, the legislature decided that the “certain persons” should be mentioned by name. A measure passed that year (signed on Halloween, ha ha) amended the 1957 resolution by taking out “other persons” and specifically naming five more: Bridget Bishop, Susannah Martin, Alice Parker, Wilmot Redd, and Margaret Scott. For reasons unknown, poor Elizabeth Johnson Jr. was not mentioned, making her the only accused witch still attainted by her conviction.

This injustice was finally redressed, as is so often the case in these situations, by an intrepid group of middle schoolers working with feverish intensity on a civics project. Or was it? In this case, according to their teacher, Carrie LaPierre, not so much:

Even with political backing, however, LaPierre’s young charges weren’t immediately excited about the prospect of becoming activists for a supposed 17th century necromancer.

“Are you kidding? They’re eighth graders,” LaPierre explained. “It took some of them a month to realize she’s dead. The majority view was, who cares, it doesn’t matter.”

LaPierre said the students got a little more interested when local media started covering the matter, but that didn’t extend to the families. “Most of the parents just didn’t pay much attention to it,” LaPierre said. Well, Ms. LaPierre cared, anyway, and she convinced state senator Diana DiZoglio to get on board.

The bill that was signed this week, S. 1016, exonerated Johnson in sweeping, lofty language befitting this small triumph of rationality over the forces of ignorance and superstition:

Chapter 145 of the resolves of 1957, as amended by chapter 122 of the acts of 2001, is hereby further amended by inserting after the word “Scott”, each time it appears, the following words:- , Elizabeth Johnson, Jr.

Okay, maybe not all that lofty. But it got the job done.

Note: I highly recommend the article on this by Tom Harrison of Courthouse News Network, despite the fact that I am quoted in it.

Plaintiff Alleges Boss Insisted He Get an Exorcism

New Tax Strategy: Trip and Fall at the IRS Office

No, Twerking Is Not Illegal

Parents Sue Their Son, Demanding Grandchild or $650,000 in Compensation