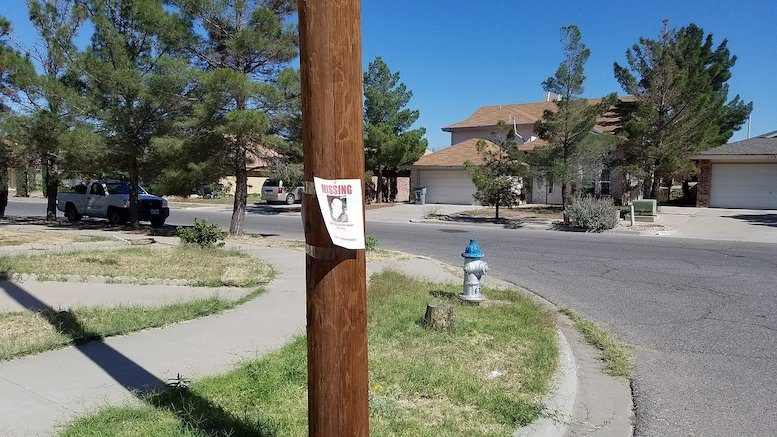 If the flyer you're putting up has your face on it, please tell someone (Image by Abel Delgado from Pixabay)

Ever been to Turkey? I highly recommend it, although I should make clear that when I was there it wasn’t run by a dictator who once prosecuted a guy for saying that he looked like Gollum, even though he does, in fact, look a lot like Gollum. (Obviously I may not be visiting there again, depending on which one of us dies first.) But setting aside the current leadership, it’s a beautiful place with all kinds of historical, archaeological, and cultural treasures, and is a terrific place to visit if you can.

If possible, you should get drunk and join any search parties that may be forming in the area. Although I guess that is good advice no matter where you happen to be.

If it turns out the search party was looking for you, well, then you wasted your time but at least you can be pretty sure everything will come out okay in the end.

According to NTV.com, Bursa’da ilginç olay: Kayıp olduğu sanılan kişi kendisini arama çalışmasına katıldı, which evidently means “Interesting event in Bursa: The person who was thought to be missing participated in the search for himself.” The report says 50-year-old Beyhan Mutlu was out drinking with friends when he wandered off into a nearby forest. Eventually his friends noticed he was missing, and when he didn’t turn up they reported it to the local authorities. Police and emergency teams organized a search party, and when word got out, volunteers from local neighborhoods joined the hunt. “After a while,” NTV reported, “the teams began to call the missing person’s name.” This strategy paid off when a man in the group of volunteers spoke up and said, “Who are we looking for?” When it turned out to be him, the mystery was solved. “I am here,” Mutlu announced. The search was over.

Is this the first time a person reported missing has turned up in the search party? Of course not. Reporting on the same story, Vice notes that in 2012, a tourist in Iceland joined a search party scouring a remote area for someone who had failed to return to the tour bus after an outing. Police and volunteers spent at least half a day searching for a missing person described as being a “woman of Asian descent, about 160cm tall, dressed in dark clothing and speaks English well.” The search was finally called off at 3 a.m. the next morning after a member of the search party realized the description was referring to her. Apparently, she had changed her clothes before getting back on the bus after the outing; as a result, the driver didn’t recognize her, and she didn’t realize she fit the description because she was no longer wearing “dark clothing.” According to this report of the incident, the woman didn’t actually join the search party, it just turned out “she had been on the bus all the time” while everyone else searched for her. That’s translated from Icelandic, though. But even if that’s what happened, it’s almost as good.

The latter report also recounts a similar incident in Iceland back in September 1954, when “a great search had been made for a young girl in a red coat,” only to be called off when a member of the search party reported to the police that she “thought it was likely that the search had been carried out because of her.” Her clothing, too, had been incorrectly described. I mention this incident partly because if this has happened twice in Iceland (population 370,000 today; maybe half that in 1954), then even if the incidents were 60 years apart this probably happens a lot more than we think. I suppose tourists are more often to blame than locals, but still.

I don’t think I’ve reported on this precise issue before, probably because it’s not clear there’s a legal issue involved, and I do try to maintain some connection to my overall theme even though who cares. But I have reported on cases where someone forced others to search for them unnecessarily, when they weren’t lost at all. That can definitely pose legal problems if the person, say, tried to make it look like she had fallen into a gorge in order to avoid serving time for health-care fraud. See “Felon Who Died in Tragic Fall Found Alive in Closet” (Aug. 24, 2020). That woman and her husband faced multiple charges relating to the false report, which prompted a two-day search-and-rescue operation, and were both sentenced to jail time for conspiring to obstruct justice. Plus, of course, she still had to do the time for health-care fraud on account of not being dead.

But the prime example of that sort of thing, or at least the prime example sufficiently dumb to be covered here, was the Balloon Boy saga. That, of course, was the 2009 case in which Richard and Mayumi Heene falsely reported that their six-year-old son Falcon had accidentally been carried away in a helium balloon, which they reportedly did in hopes of landing a reality-show contract so they could make a lot of money before the apocalypse then scheduled for 2012. See “FAA Investigating Balloon-Boy Case” (Oct. 21, 2009); “Balloon Parents to Plead Guilty” (Nov. 12, 2009); “Balloon Boy’s Parents Finally Reunited With Balloon” (June 3, 2010); see also “UPDATE: ‘Balloon Boy’ Saga Is Now a Musical” (June 20, 2014). They pleaded guilty to false reporting and “attempting to influence a public servant” (I assume the charge is for doing so by improper means), and also had to pay restitution for what it cost to force public servants to chase a balloon around Colorado because they claimed their kid was in it.

Again, this is not the same as a person unknowingly volunteering to join a search for himself, which might possibly be negligent but would not be a crime. The other main difference is probably that in the unwitting-search situation, it seems to get funnier the longer the search lasts before the mistake comes to light. That doesn’t seem to be the case if someone intentionally prompts an unnecessary search. Unless it involves a kid who supposedly floated away in a balloon, in which case, I personally think, the longer the better.

Court Says You Can’t Bang a Gong Near a Hospital

Do Englishmen Still Have to Show Up for Longbow Practice?

“I Regret That I Have But One Nose to Give,” Says Lawyer Who Was Punched in It