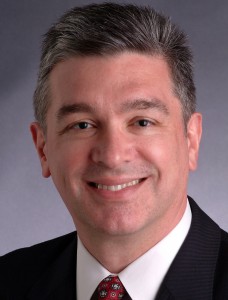 Kevin Underhill is a partner in the San Francisco office of Shook, Hardy & Bacon, and to the surprise of many, himself included, has been with the firm for over 20 years. He has been funny for much but not all of that time.

Kevin began his career in the firm’s Kansas City office in 1993, and “relocated” (his term) to San Francisco in 2000. He “worked” (also his term) in the Business Litigation section while in Kansas City but now spends the bulk of his time on the defense of products-liability and consumer-protection cases. He is about 85% of the way to a California state certification in appellate practice, which of course everyone will have to hear about again when he finally gets certified. “Oh, Kevin, that’s so interesting. Please tell us again about the discretionary writ petition you drafted in order to get the last few points.” Christ.

Kevin is known for his analytical and writing abilities and also for his irritating tendency to write his own biographical material in which he talks about himself in the third person.

In an effort to appear to “care” about “people,” Kevin created and managed a pro bono program defending the rights of disabled tenants to reasonable accommodations, working with a group called Pets Are Wonderful Support. PAWS helps disabled clients care for their pets and service animals, and has hundreds of clients suffering from disabilities such as Parkinson’s Disease, AIDS, depression, and cancer. You should contribute to it or a group like it in your area.

Kevin’s essay series, “If Great Literary Works Had Been Written by Lawyers,” was published in The Green Bag law journal and was mentioned in the Wall Street Journal and on National Public Radio, among other places. Kevin himself has also occasionally been heard on NPR, has been blogging and otherwise writing for years, and started Lowering the Bar in 2006. He has given numerous presentations for law firms and legal departments across the country.  (He would give one for your group, too, if you asked him.)

Kevin has written a book, The Emergency Sasquatch Ordinance, about some of the world’s weirdest and/or dumbest laws, beginning in the distant pre-Hammurabi past and including many laws that, for whatever reason, are still on the books today. It was published in 2014 by ABA Publishing, and is available via Amazon.com (among other sources). You should buy it.

He answered the following questions for his official law-firm biography while wearing a tuxedo, smoking a pipe, and sitting in what he calls his “Partner Chair,” although it is in fact just a regular chair.

Where did you go to law school and when did you graduate?
I attended Georgetown University Law Center in Washington, D.C., on a full-ride cite-checking scholarship. I graduated in 1993.

What is your favorite quote?
“At 20 miles a month, a determined Burmese python from Florida could arrive in San Francisco as early as August 2020. ‘It would be exceptional for one animal to be that unidirectional in its movement, but it’s mathematically possible,’ Rodda said. The snake’s cross-country crawl would be made easier by the large population of beavers along the way. ‘Beavers would be a very tasty treat for them,’ Rodda said. ‘No beaver would be safe from a python.'”

Do you prefer cats, dogs or other creatures as pets?
I prefer dogs that act like cats, but have been happy with a cat that acted like a dog.

In August 2020, I plan to get a giant Burmese python. [Sept. 2020 UPDATE! Did not happen. Experts blame media fearmongering.]

What movie have you seen most recently?
“Conflicts of Interest,” starring [SHB legal counsel] Gene Voigts. It’s a legal thriller about a man whose substantial relationships are tested by ethical walls. (I wrote the screenplay based on a memo I did.) It sucked but the acting was first-rate.

What was your most unusual job?
Once I had a job where I was paid a six-figure salary to basically write research papers on legal issues and, occasionally, argue with somebody. I thought that was pretty remarkable.

What could you not live without if shipwrecked on a deserted island?
Food. Also, water.

What skill would you most like to have?
I’ve always wanted to be able to whittle.

Who are your favorite writers?
Ernest Hemingway, and the people who write for The Onion.

Who are your heroes?
All the people who had the strength of character to state under oath that they didn’t know whether “waterboarding” is torture or not. Also, all those who are still Kansas City Chiefs fans.

What avatar would you choose to be in a virtual world?
I would be a level 62 undead warrior named Gluteus. If I did that kind of thing.

What profession other than your own would you like to attempt?
Equity partner.

If you could live anywhere in the world, where would that place be?
Inside an active volcano.

What is your idea of the perfect vacation?
Living as an equity partner inside an active volcano.

What is your favorite food?
Cheese.

How do your friends describe you?
For a long time I was reluctant to have “friends” in case terrorists might try to threaten them to get me to tell them a password or important case cite or something like that. Like most of what I do, that policy was both carefully thought out and completely unnecessary. The friends I have now generally describe me as “strange,” “caring,” or sometimes, “strangely caring.”

Email addresses Kevin has been known to use include:

He invites your tips, comments and suggestions, and thanks you for reading this.