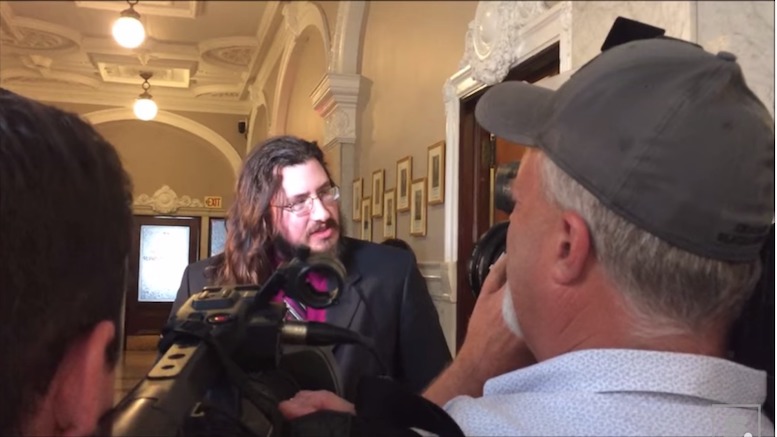 Most 30-year-olds who live at home probably aren't keen on telling the media about it (image: Syracuse.com)

New York Supreme Court Justice Donald Greenwood praised Michael Rotondo for finding a case on point, but noted that a later appellate decision had overruled it. As a result, Greenwood ruled, Rotondo would indeed have to move out of his parents’ house, as they have demanded.

As reported by Syracuse.com, Rotondo’s parents have been telling him to move out for quite some time, but he refuses to go. This was despite a series of remarkable written demands for his departure, beginning with this one in February:

Presumably Michael would have known who this demand was coming from, so I’m guessing the full signature was intended to make it seem more formal and therefore “legal.” If so, it wasn’t  formal or legal enough, because Michael ignored it. His parents therefore escalated significantly in their next demand letter: 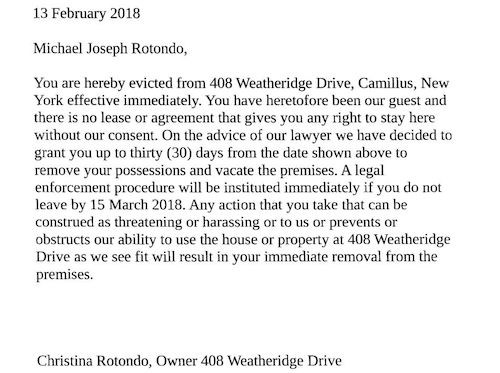 It’s not a letter from a lawyer, but it at least purports to be written pursuant to a lawyer’s advice. The level of legalese has in fact spiked dramatically: note, e.g., the use of “hereby”; “effective immediately”; “heretofore”; “vacate the premises”; and the verbs “institute,” “construe,” and “obstruct.” And, of course, the appearance of something like “thirty (30)” is normally a dead giveaway that a lawyer is involved.  It is possible, of course, that a lawyer wrote this for them, but I don’t think so, for at least three reasons.

First, if they did have a lawyer, why not have him or her use scary letterhead, or even better just come over and try to scare him out in person? (That sentence is making me think of Scooby Doo but I don’t have time to develop that any further.) Second, while “thirty (3o)” is normally a dead giveaway that a lawyer’s involved, the use of all three names is normally a dead giveaway that a mother’s involved. Michael Joseph Rotondo, you move out of this house right this minute! This is also not something lawyers typically do, in my experience. Finally, I think a lawyer would have written “eviction” or “unlawful detainer” or whatever it’s called in New York, not just write “legal enforcement procedure.” Oh, fourth reason: they didn’t wait until the 14 days were up. So I’m guessing this was not written by a lawyer, but by a layperson trying to sound like one. Close call, though.

In any event, it didn’t work. And so, in the next message—just five days later—they reverted to more normal human language. 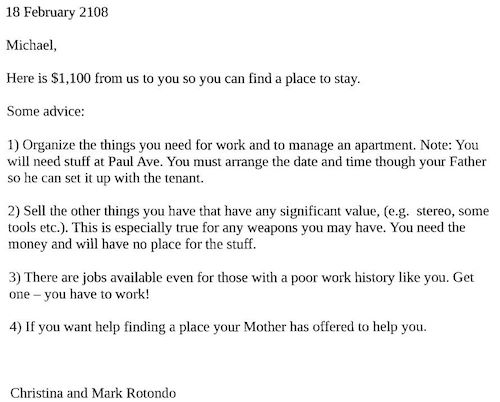 I’m really hoping the line “[t]his is especially true for any weapons you may have” refers to something like a collectible light saber.

Two further letters followed, on March 5 and 30 respectively. Obviously, the previous deadlines had not been heeded, and these, too, were ignored. So in April, the parents finally went to court to evict their 30-year-old son.

Justice Greenwood heard the case today, and he was extremely patient with Rotondo (though by no means as patient as his parents have been). Greenwood praised his research but provided a copy of the contrary authority he didn’t find, and urged him to talk with his parents to try to work things out. Rotondo refused, saying it was a legal matter now. Okay then. After what was described as about “half an hour of back-and-forth” with the son, Greenwood ruled in the parents’ favor and said Rotondo would have to leave. When? “No specified deadline was stated in court,” the report says, but the parents’ lawyer said the order would provide a “reasonable time” to vacate. (Hint: it would be a good idea for the order to have a specific deadline in it.)

As for what life has been like in that household recently, it doesn’t seem to be clear. His parents haven’t said much about the matter, but Rotondo seems to enjoy talking to the press. According to him, there have been no “incidents” at home—and that’s good to know, considering his mom’s reference to “weapons”—but he and his parents don’t talk. As for why he won’t just get the heck out, that’s not clear, either. “When asked if he considered spending as much time looking for a new place to live as fighting the eviction,” the report says, “Rotondo replied that he wasn’t ready to leave home.” Well, he better get ready.

Assuming his parents have been paying for him to use the internet, Rotondo should have been reading Lowering the Bar, because then he might have known that these cases don’t turn out well. Actually, I guess I’ve only covered one other such case, which was slightly better than this one because that guy actually sued first, and it backfired in a big way. See “Man Who Sued Parents for His Allowance Instead Gets 30 Days to Move Out” (Apr. 2, 2011).

Also, according to the report in that case, the son, who was 25 years old, had been “studying law, albeit at a slow rate….” I guess we could probably say the same thing about Rotondo.

Why Poland Has Three Presidents Today

Target of Police Raid Had Been in Prison for Five Years, Plaintiff Alleges