"You can quote me [on that]," said the expert after describing the U.S. government's actions as "crazy pants," and so I am. I am quoting him as often as possible, in fact. 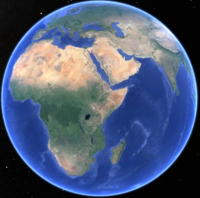 It's not entirely clear from this McClatchy report whether former State Department counterterrorism advisor Will McCants meant that the issuance of the alert itself or the subsequent action was crazy pants, but it sounds like the latter. The thrust of the story was that experts are puzzled by the fact that although the administration said it learned of an "immediate, specific threat," the alerts it issued covered 28 separate diplomatic posts in areas ranging from Mauretania to Mauritius, and from Afghanistan to Burundi.

Sure, it makes sense to issue alerts for posts in Yemen, Iraq, and Afghanistan; the only puzzle may be why those are ever not on alert. But experts said it seemed crazy pants to include areas like Mauritius or Madagascar, which have no known connection to al Qaeda. There was also some crazy pantsness to the fact that posts in the hellholes of Afghanistan and Iraq reopened on Monday while others in less dangerous areas (i.e., Mauritius, former home of the dodo bird), were to stay closed until Saturday.

(By the way, according to the report the U.S. no longer "evacuates" embassies, we engage in "ordered departures" from threatened areas. Please make a note of it.)

"It's not completely random," said another expert of the administration's reaction, "but most people are, like, 'Whaaat?'" Other terms used to describe it in addition to "Whaaat?" and "crazy pants": "willy-nilly," "baffling," "tenuous," "head-scratching," and "who really knows, anyway?" White House spokesman Jay Carney wasn't helping any: "What we know is the threat emanates from, and may be focused on, occurring in the Arabian Peninsula," he said yesterday. "It could potentially be beyond that, or elsewhere. We cannot be more specific." So, just stay away from everywhere, thanks.

But we have to do something, don't we, because isn't this "the most serious threat [Sen. Saxby Chambliss has] seen in the last several years," reminiscent of "what we saw before 9/11"? Actually, "[t]hat is absurd hyperbole that is coming almost entirely from reckless commentators or ill-informed or ill-spoken [Capitol] Hill folks," or so said Michael Leiter, but what does a former director of the National Counterterrorism Center know about counterterrorism? "I don't think this was purposeful hype," Leiter continued, "but no one who really knows al Qaeda or its history thinks that this is as huge a deal as portrayed—and certainly nothing remotely close to the worst thing we have seen since 9/11."

Others do think it might be "purposeful hype," though, noting that the timing of the alert coincidentally coincides with increasing criticism of NSA surveillance programs, which Chambliss credited with uncovering this latest plot. Even though the programs are controversial, he said Sunday, "this is a good indication of why they're so important." Or, it isn't: "an intelligence official [told the AP that] the controversial NSA programs that gather data on American phone calls or track Internet communications with suspected terrorists played no part in detecting the initial tip."

Or, it is, because not only did the "crucial intercept" involve a phone call—an NSA specialty—it was actually a conference call involving more than 20 al Qaeda operatives including (and presumably hosted by) current leader Ayman al-Zawahiri, or so said The Daily Beast today. Really. The most elusive and deadly dangerous terrorist group in the world, which has been opposing a technically sophisticated superpower for two decades now, and many members of which have been blown up recently as a result of using cell phones, manages worldwide operations through conference calls. Which the NSA is really good at listening to.

Now that would be crazy pants.

One analyst said he'd just been ignoring the alert entirely "because there's an infinite number of possibilities. It would be like speculating on the reboot of the 'Star Wars' series." I guess that's right: nothing we can do will stop it from coming; all we can really do is hope it doesn't suck as hard as the last time.