If you have been taking any comfort in the idea that our strategy in the War on Terror can’t get any worse, cut it out.  MSNBC reported recently that the Pentagon has spent $2.5 million to date on a project that will provide hand-held lie detectors to U.S. soldiers in Iraq and Afghanistan.  While that may seem like an expensive and stupid idea, according to a professor who headed a National Academy of Sciences study on polygraphs the project is now ready for deployment:

"I don’t understand how anybody could think that this is ready for deployment," said statistics professor Stephen E. Fienberg, who headed a 2003 study by the National Academy of Sciences that found insufficient scientific evidence to support using polygraphs for national security. "Sending these instruments into the field in Iraq and Afghanistan without serious scientific assessment, and for use by untrained personnel, is a mockery of what we advocated in our report."

Well, maybe I read that wrong.

The "Preliminary Credibility Assessment Screening System," or PCASS, is a sort of mini-polygraph with sensors strapped to the subject’s hand, and a hand-held readout.  Unlike the polygraph’s complex, multivariable graph that must be interpreted by a trained user, the PCASS offers this: 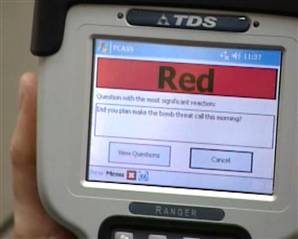 If you guessed that "Red" means the subject is lying, congratulations!  You are now a fully qualified interrogator.

Actually, according to something called the "Defense Academy for Credibility Assessment," there is a little more to it than that.  PCASS operators must have a full week of training and, if possible, a high-school diploma.  By contrast, polygraph operators must have college degrees, experience in law enforcement, pass a 13-week course in the device and do a six-month internship before being allowed to use their unreliable device.  But then training is less important now: "the Defense Department says PCASS is simple to operate, because judgment of truthfulness is left to the computer."  With humans out of the loop, you see, there is nothing to worry about.

To find terrorists, a PCASS operator simply asks the detainee a series of "20 or so questions in Persian, Arabic, or Pashto" (if he speaks any of those), such as the following:

That should cover it.  Red = possible terrorist.  Green = definite non-terrorist.  Yellow = "inconclusive."  According to studies, there are many yellow readings, although the Pentagon helpfully excluded them when calculating the alleged accuracy rate of the device.

The report did not say what the other 17 or so questions were, but here are some guesses:

The device’s sponsors admit the thing is not perfect, and say it wasn’t intended to be.  According to Donald Krapohl of the DACA, it’s intended only for preliminary assessments, and even if its accuracy is, say, only around 60 percent, that is still better than relying on the alternative, human intuition.  "[L]et’s get rid of the PCASS because it makes errors, and go back to the approach we’re currently using, which has less accuracy?  As you can see, that’s really quite untenable."  Think about that when you are getting ready for your next jury trial.

Stephen Feinberg,  the freedom-hating professor quoted above, claimed that he, too, wants to find terrorists and to protect American troops.  But, he says, the troops "need devices that work.  And if they rely on things that really don’t work, and act as if they do, we will have a greater disaster on our hands than we already do in the field in Iraq."

Speaking of things that really don’t work, and act as if they do, Congress was told in November that the PCASS had been approved for field use, but no hearings on the matter have ever been held.