On June 23, a federal judge in New York denied a motion to dismiss Robert Burck’s trademark-infringement claims against Mars, Inc., and its ad agency.  Mars is the maker of M&Ms, among other things.  Mr. Burck is better known as "The Naked Cowboy," a Times Square performer who plays guitar while wearing only a white hat, boots, and briefs.  Burck sued in February based on an ad campaign in which M&Ms were shown wearing a somewhat similar outfit: 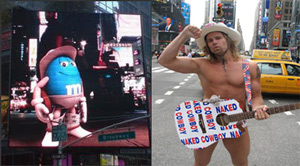 Burck is the one on the right.

According to the lawsuit, Burck has trademarked his look and has licensed his name (the Cowboy name) to various companies.  (Ryan Giles’ trademark blog provides some relevant and comical links, including one to the Patent and Trademark Office’s web page for Burck’s official design mark, shown here.)  But Burck says he has never endorsed M&Ms, at least in the narrow legal sense.  Judge Denny Chin ruled that Burck had at least properly alleged a claim that "consumers seeing defendants’ advertisements would conclude — incorrectly — that he had endorsed M&M candy."

Chin did dismiss a right-to-privacy claim also brought by Burck.  While it may seem a little odd that somebody who performs in his briefs in the middle of Times Square would be asserting a "right to privacy," that term is also used to refer to a person’s right to protect his or her name or picture from unauthorized use.  Chin held that while this concept would have protected plaintiff in his "Robert Burck" mode, it does not protect the name or picture of a character or role that someone creates, so "Naked Cowboy" Burck does not have a claim of that kind.  But his trademark claim is going forward.

Burck’s image appeared in a series of advertisements in which M&Ms appeared on billboards dressed as other iconic New York characters, such as the Statue of Liberty (if it’s accurate to call her a "character") and King Kong.  You’d think he would be willing to cut advertisers a little slack — if we’re going to start pointing fingers, what about the fact that the Cowboy, who wears briefs, is technically not "Naked"?  He may appear to be, depending on guitar placement, but that only heightens the deception.

A pretrial conference is set for July 11.