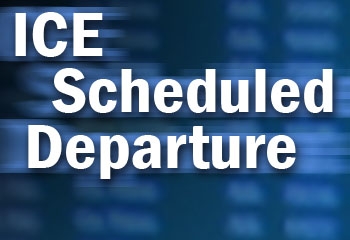 Sources reported today (August 22) that the federal government would be ending Operation "Scheduled Departure," an innovative pilot program under which illegal immigrants would have up to 90 days to leave the country on their own initiative.  Under the program, offered by the bureau of Immigration and Customs Enforcement, illegal immigrants who turned themselves in would be deported.  By contrast, those who did not turn themselves in would be deported, if the government could find them.

While this might seem like a no-brainer, at least for those eager to be deported, the San Diego Union-Tribune reported on August 14 that the program was off to something of a slow start after its first week.  Estimated number of illegal immigrants eligible to take advantage of the program: 457,000.  Number who had taken advantage of it: six.

The six included a Mexican in San Diego, a Salvadoran in Charlotte, two Indians and a Guatemalan in Chicago, and in Phoenix, one Estonian.  This was an overall response rate of just .0013 percent, although Arizona is probably hailing the end of its Estonian-immigrant problem.

As of August 14, ICE was not yet ready to give up.  "We are getting a significant amount of calls and inquiries on our Web
site," said a spokesperson, who did not define "significant."  But her optimism turned out to be well-founded — by the program’s last day, the total had risen to eight.

Despite these encouraging signs, the director of ICE’s detention and removal operations said the agency would end the program.  "The bottom line is," he said, "it is not effective."  He said the government had spent $41,000 to advertise it, but insisted the country had saved money because the cost of detaining those people (had they been otherwise found) would have been $37,000.  Critics charged that the agency actually had done little to provide real incentives for immigrants to come forward, so that it could point to the program’s failure as a justification for more enforcement raids, which are more fun.

But there might be another explanation for the low number of respondents.  According to the ICE Fact Sheet on Scheduled Departure, the program was available to "fugitive aliens" with no criminal history.  I noticed that the Fact Sheet includes answers to such frequently asked questions as, "How do I know if I am a fugitive?"  Maybe we just need to educate the public a little more so that we can reach the silent majority of people who don’t know they’re hiding from something.

If I Am Captured, This Blog Will Continue

Californians Can No Longer Be Forced to Join a Posse