On whether or not to look at the camera, anyway: 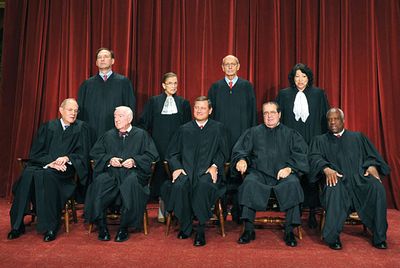 Actually, that does not appear to be the final official portrait.  Good thing, because this almost seems like one of those band photos where they all insist on broodingly staring off in different directions.

There are, for whatever reason, at least three shots of the new Court floating around the Internet.  The actual portrait, I think, is this shot that appears today on the New York Times blog "The Caucus": 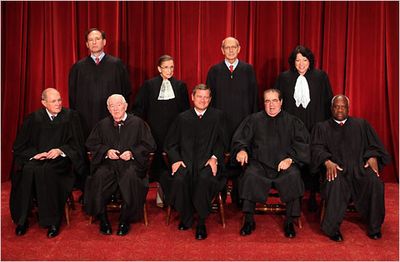 This one is better: Sotomayor looks happier, Alito less terrified, Kennedy and Stevens stopped chatting, and, in a moment of rare agreement, Roberts and Stevens both decided to look at the camera.  Justice Breyer hasn't moved at all, and for some reason I have the feeling that he assumed that position hours before anyone else arrived.

Justice Ginsburg is standing in both pictures, despite having just been released from the hospital.  I assume there is some protocol-related reason why none of the gentlemen in the front row has offered her a seat.

Sarcasm Not Helpful to Arrestee