As we learned from Alanis Morrisette, irony is a tricky concept, so I have looked up the definition:

1. A figure of speech in which the intended meaning is the opposite of that expressed by the words used; usually taking the form of sarcasm or ridicule in which laudatory expressions are used to imply condemnation or contempt.

2. fig. A condition of affairs or events of a character opposite to what was, or might naturally be, expected; a contradictory outcome of events as if in mockery of the promise and fitness of things.

So, if one who dressed for Halloween thusly — 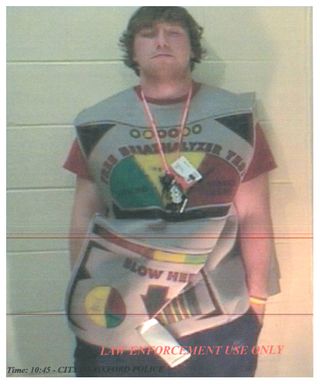 . . . is later arrested after being found driving with a BAC of .158 (as measured by an actual Breathalyzer), and with an open can of beer in the cupholder and "the remains of a case of beer" on the passenger seat, does that constitute irony? I think so. This state of affairs is certainly not what he expected when donning the costume, nor is it what a viewer might expect to see when viewing the mugshot of a DUI arrestee.

Also, there is mockery involved.

If that's not technically irony, it's close enough for this blog.

Good Reason to Kill #7: Disagreed With Your Macaroni Recipe