The obvious headline for this one, "Yeah, that's the ticket!" has already been used many times by now.  I successfully resisted the urge to use it myself anyway, but it wasn't easy. 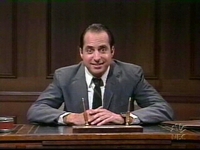 Jon Lovitz, who portrayed "Tommy Flanagan: Pathological Liar" on Saturday Night Live in the 80s, has been sued by the Los Angeles Dodgers for allegedly failing to pay for season tickets for the 2010 season.  Lovitz is one of a group of about 100 people who the Dodgers claim agreed to buy three dugout club seats for all home games in 2008, 2009, and 2010.  Dodger Tickets LLC is seeking approximately $100,000 for breach of contract in the lawsuit filed Monday in Los Angeles.

Lovitz was a cast member of SNL from 1985 to 1990, and was (you may be surprised to learn) nominated for an Emmy his first two years on the show.  The Pathological Liar was one of his recurring characters, along with Master Thespian ("I was merely ACTING!") and Mephistopheles.  Wikipedia also mentions his crucial supporting role in a classic sketch in which William Shatner loses it in a speech at a "Star Trek" convention: "In a 1986 episode [Lovitz] played a virgin Trekkie, who was scripted to hang his head when asked by William Shatner if he had ever kissed a girl."

He has been in large numbers of movies and TV shows since then, but I don't know whether he's ever been deposed.  I predict that whoever takes Lovitz's deposition will be unable to resist the urge to bring up The Pathological Liar at some point, so you might as well just go ahead and try to get it out of the way in the first 30 seconds or so.

Does Size Matter? (Or, In Memory of Miss Wiggles)