First and most importantly, when covering your face with notes you have taken in court, the side you have written on should face toward you: 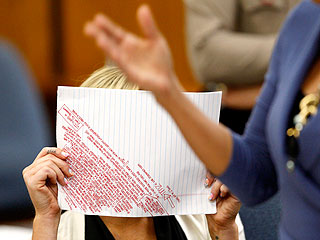 Second, Lindsay has excellent handwriting, the downside of which is that your notes may be legible from a distance.

Third, while I personally think cameras should not be allowed in courtrooms at all, they are, and Lindsay was aware of this – her notes even state that TMZ was apparently "live-streaming" the hearing.

Fourth, Lindsay has lots of explanations for her poor probation-compliance record, such as other people not being places on time, other people not telling the truth, other people not minding their own business, and the fact that she had to go to Haiti for a benefit (the notes did not mention her required trips to the MTV Awards or the Cannes Film Festival).

Celebrities who are being constantly monitored probably also should not stencil obscenities onto their fingernails before going to court, or be heard insulting the judge just a few minutes after telling her "I don't want you to think I don't respect you."  (True – you don't want her to think that.)  I thought those revelations might earn her some extra jail time, but the Los Angeles Times has reported that Lohan is likely to serve only a fraction of the 90 days she got this week.

Parents Sue Their Son, Demanding Grandchild or $650,000 in Compensation