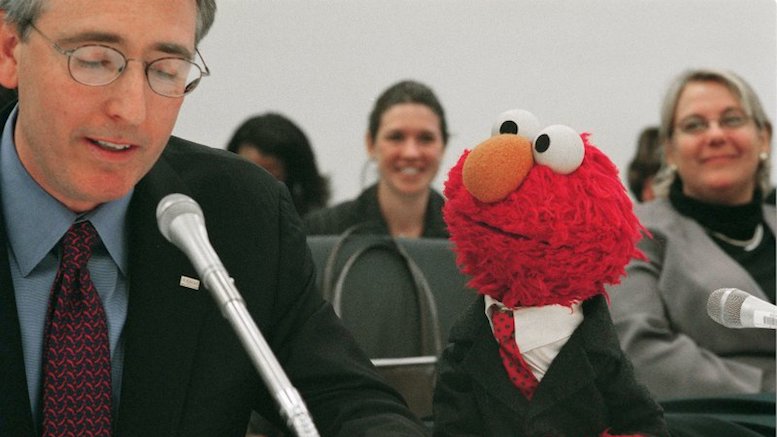 There is no shortage of news items on Stephen Colbert’s testimony before Congress, and as many of these stories note, some Democrats also did not think that having a comedian testify was such a great idea. (And some Democrats are also not funny, although it seems unlikely anybody there from either party could have been less funny than Rep. King.)

I thought this item by Ruth Marcus of the Washington Post was especially instructive. She is a Colbert fan but did not think he should have testified. She does remind us, however, that he is by no means the first celebrity to have been called before a subcommittee for this sort of thing. Specifically, the Republicans who complained so bitterly about Colbert are forgetting that when they controlled the House in 2002, they heard testimony from a muppet.

In April of that year, a Mr. Elmo Monster testified before the Education Appropriations subcommittee in support of funding for music education programs. Everyone in that picture seems to be having fun, but there’s always a curmudgeon around. In this book excerpt, Gene Healy noted that Elmo was testifying on a date that fell about midway between September 11 and the vote on the Iraq War, and Healy found the whole spectacle deeply embarrassing, criticizing Elmo for not giving more substantive testimony:

In between trying to eat the microphone and interrupting his fellow witness, Elmo engaged in this informative colloquy with subcommitee chair Ralph Regula (R-OH):

Elmo: Please, Congress, help Elmo’s friends find the music in them. I love you, Congress.

Regula: And my grandchildren love you too, Elmo. 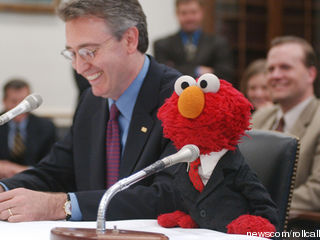 At least somebody loves Congress

Oh, come on, Congressman. You can’t tell Elmo you love him?

Healy described Congress as the new “least dangerous branch” of government, and that might be true, but that’s not Elmo’s fault. Give the muppet a break.

I would like to ask that the next Supreme Court nominee try to eat the microphone, just so we have some reason to watch those useless confirmation hearings.