A South Carolina lawyer known for his TV commercials and billboards has turned over $994,000 in cash kept in a closet of his Myrtle Beach law office after a court-appointed bankruptcy investigator stressed the importance of disclosing his assets.

Harry Pavilack's bankruptcy filings in September reportedly disclosed estimated debts of $72.5 million and assets of just $50,000. The bankruptcy examiner looked at some of Pavilack's 60 corporations, and noticed that a lot of money was moving through some of them although they did not seem to actually do anything. He asked Pavilack to explain some checks made out to "petty cash," although the amount of cash ($900,000) was not really that petty. Pavilack did not have a good explanation for those, but (I'm speculating here) he did then poke around in his office a bit and what do you know, there was $994,400 in the closet. 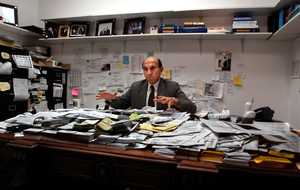 Got some assets around here somewhere

An amended filing two months after the first one disclosed $8.9 million in assets, although most of it was said to be real estate rather than newly discovered stacks of cash. Pavilack had blamed his financial situation in large part on the recession, but the examiner's report said that did not explain where millions in cash assets had been going. According to the report, some of it may have been transferred to friends, some to relatives, and some, of course, into the closet.

Also, at least some of it is in Peru. The examiner found that Pavilack had recently opened two bank accounts there, depositing $200 each. Surprisingly, Pavilack "has not explained the purpose or need for foreign bank accounts," the report states. Well, you have to admit they're safer than closets. Depending on the country, anyway.

Ultimately, the examiner was unable to determine exactly how much money Pavilack might have or where it is because his financial records (like his desk) are in complete "disarray." Reconstructing them, the examiner said, is a "pipe dream."