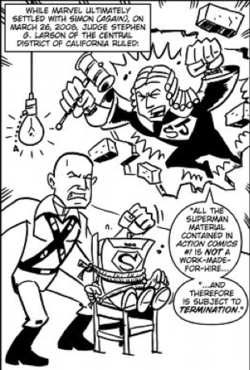 This is one panel from a new comic book that, according to The Hollywood Reporter's legal blog, tells the "incredible, insane true story" of legal disputes in the American comic-book industry, including, for example, whether Captain Marvel infringed on Superman. (The characters, that is. Nobody infringes on Superman in "real life." Unless they have kryptonite, that is, which I've always thought was surprisingly common.)

Having been before Judge Larson, I can tell you that he is almost that imposing in person, although he did not actually burst through any stone walls while I was in his courtroom.

Danny Trejo Does a Lawyer Ad