The Wall Street Journal's Law Blog reports that students at Duke Law School have written and produced a musical about a young Richard Nixon, who graduated (third in his class!) from Duke in 1937 and quickly became its least favorite alum. The report states that "Tricky Dick" was performed for the second time last Friday. 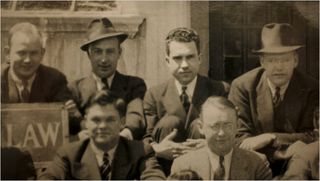 According to the New York Times, Nixon (shown above wondering whether any of these other guys are Communists) spoke at Duke's graduation in 1954 but didn't get the honorary degree that speakers normally get, even though he was Vice President at the time. (He had proven he was a creep by then but I don't think he had done anything illegal yet.) The faculty voted in 1981 not to host Nixon's presidential library, and for many years the school has not displayed the one portrait it has of Nixon, out of concern it might be vandalized (or possibly remind people that Nixon went to Duke).

So there was "little acknowledgment" from the Duke administration of the musical's first performance last year, but the reviews were good and this year at least one administrator was part of the 50-person ensemble. Officials even brought the Nixon portrait out into the law library, although it wasn't clear how long it stayed out in the open.

In the musical, Nixon is "imagined as a young, ethically challenged Duke law student running for student-body president" (he was in fact president of the Duke Bar Association, which may have been the same thing). Presumably the story line involves some sort of a break-in, but I'm just speculating.

According to this page at Duke Law's website, the musical was performed last Friday, April 1, at the "Durham Arts Center." But according to the group's Facebook page, it was at the "Durham Arts Council." Both of these places exist (although the first appears to be the "Durham Performing Arts Center"), but interestingly, so far as I can tell neither one has "Tricky Dick" listed on its website. If this was an April Fool's joke, it was a very elaborate one, but probably it was just a last-minute rebooking or something like that.

I guess I'm still just a little suspicious about anything involving Nixon.

Update: One of the writers/cast members wrote me to confirm that this was for real and that it was performed at the Durham Arts Council. Apparently one of the dancers also got confused and ended up at the Durham Performing Arts Center for a rehearsal, and was going around asking people "Where is Tricky Dick?" (This reminded me of "What's the frequency, Kenneth?")

I'm not sure if there are any other Nixon-themed musicals out there. I didn't find any, although there is at least one Nixon-themed opera called "Nixon in China" (which seems to be entirely serious). Nixon himself enjoyed music, and played the piano pretty well. Here he is at the Grand Ole Opry in March 1974, accompanying the crowd as it sings "God Bless America." (He seems to be enjoying himself, probably because he doesn't know he's just been named as an unindicted co-conspirator in Watergate.) So it seems fitting that there is now at least one Nixon musical. Congratulations to the Duke law students who somehow managed to pull this off while also going to law school.

Note to Self: “What Happens in Vegas, Stays in Vegas” May Not Be Legally Binding