Today in its My Cousin Vinny coverage, Abnormal Use interviews actor James Rebhorn, who plays the prosecution's expert witness. Rebhorn is somebody whose name you probably don't know but whose picture will likely cause you to shout out, "Oh, that guy, he's in everything," and then somebody will ask you to stop shouting in your office because is something wrong with you or what? 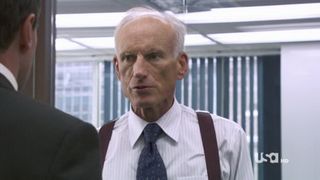 Rebhorn is a great character actor who has appeared in everything from TV soap operas to numerous big-budget movies during his 30-year career. He's often cast as a doctor, lawyer, politician or vaguely sneaky bureaucrat of some kind; for example, he's the guy in Independence Day who tells the President that, actually, there is an "Area 51." In this excerpt from the Abnormal Use interview, Rebhorn discusses perhaps his most important role as a lawyer, in which he played the prosecutor in the final episode of Seinfeld:

JD: In your career both on stage and on screen, you’ve played a number of attorneys and judges, and even jurors. Do you prepare for those types of roles any differently than non-legal roles?

JR: . . . [M]ost of what you’re doing [as an actor] is reacting so that dialogue between actors – they feed each other. They kind of build in a scene. But in the case of legal dramas, especially the lawyers, they’re the ones who kind of carry the ball. You know what I mean? So that they have to kind of start the conversation rolling, and they’re the ones that have to tie together the story, so that they’re less playing off of the other characters than sort of generating the scene out of their own minds. In fact, you mentioned Phil Morris [who played defense attorney Jackie Chiles] in the Seinfeld [episode] – I was the opposing lawyer in that episode.

JD: That was literally my next question.

JR: That was a particularly challenging job because they didn’t give us a script until the day before we were taping it. In that particular episode, I was really the one who was generating the ball for the whole show. I had to keep tossing it around, and nobody was tossing me anything back. They were just answering my questions. So, when you play a lawyer, I find you really have to depend upon your powers of memorization and retention when you’re a lawyer.

JD: What is it like to be the guy who sent Jerry, Elaine, George and Kramer to jail?

JR: I found it very satisfying.

Bulgaria Suffering From Too Much Democracy; Must Import Envelopes to Hold It All

Pants in the News