From "The Proof of Innocence," a paper by Dimitri Krioukov, a physicist at the University of California (San Diego): 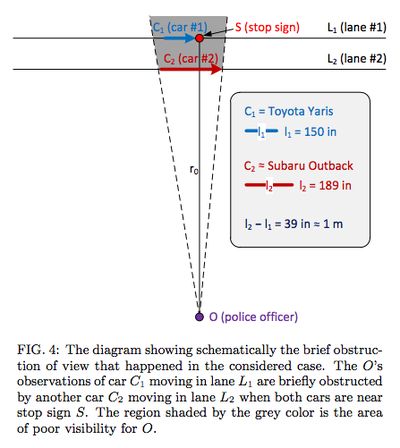 According to this post at Physics Central (via Neatorama), Krioukov got a ticket for running a stop sign, and submitted the paper to support his argument that officer O had incorrectly perceived reality in this case.

[A]n observer … located at a certain distance perpendicular to the car trajectory, must have an illusion [sic] that the car does not stop if the following three conditions are satisfied: (1) the observer measures not the linear but angular speed of the car; (2) the car decelerates and subsequently accelerates relatively fast; and (3) there is a short-time obstruction of the observer's view of the car by an external object, e.g., another car, at the moment when both cars are near the stop sign.

That is, he stopped but the officer missed it.

It looks like most of the math is devoted to showing how angular velocity can be confusing – if you're watching a car moving left to right, it seems to be going much faster when it passes you than when it's off in the distance – and that a quick stop and quick acceleration might look a lot like constant linear velocity if the observer's view of the stop itself is blocked by, let's say, a Subaru Outback.

Krioukov says he successfully avoided a $400 fine with this thing, although there are few details as to exactly what happened in court. I did notice that the paper is dated April 1, 2012, but maybe that's just a coincidence.