As the submitter of this item put it, “perhaps not the first person you’d pick to protest in this manner, but God bless him.” 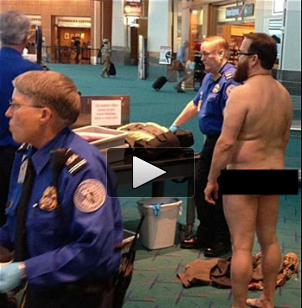 A 49-year-old Portland man on his way to San Jose was arrested last night after he took off all his clothes at a checkpoint in what he said was a protest against security procedures. John Brennan, whose name I’m using in hopes that he will become a national hero, told the San Jose Mercury News that he did not feel especially harassed by the TSA workers in question, but had stripped to protest the whole process.

“They are just doing their job,” Brennan said, “and as a citizen of the U.S. I’m doing my job to protect my constitutional rights to privacy [among others].”

Brennan had declined to walk through one of the TSA’s body scanners, which he has the right to do (I personally have declined every time and so have never walked through one). A patdown does follow that decision, and TSA workers administered one, as well as one of those pretend explosive tests. When they said Brennan has tested positive for nitrates, he decided he’d had enough, and proceeded to demonstrate that he was not carrying a bomb or anything else under his clothes.

Of course, the same people who had previously wanted him to walk though a scanner that would let them see under his clothes then objected when he let them see under his clothes. They called police, who also objected, but by this point it had become a protest. “I stuck by my guns,” Brennan said. He said that the Oregon Supreme Court has ruled that nudity is protected speech, and especially in this context he’s almost certainly right. See “Strip Club Teases Small Oregon City,” ABC News.com (Oct. 22, 2008) (discussing that court’s “liberal rulings on obscenity”). Brennan is well aware of this, so others in his vicinity might also want to be. “I know that public nudity is one of my [protected] forms of protest,” he said, “and I carry that in my back pocket.”

It’s not clear whether any travelers objected to his protest, but some did (obviously) take pictures and post them on the Internet, of which Brennan was already aware by this morning. (The photo and black bar above are courtesy of the Mercury News.) Not his fault, and fine with him. “I’m not ashamed of my body,” he said, “and I had no awareness that it [the picture-taking] was happening.”

Police did arrest Brennan, draped him with something or other, and later charged him with indecent exposure (see Amendment, First) and disorderly conduct, a one-size-fits-all charge that is also frequently pitted against the Constitution. According to the report, he is being arraigned this afternoon and doesn’t yet have an attorney, so if any civil-rights lawyers in Portland would be willing to help this man out, let me encourage you to do so.

Mr. Brennan is not by any means the only person to strip in order to protest the TSA’s nonsensical and pointless security drama, but to my knowledge he might be the only person to have stripped completely bare. There was the passenger who got naked during an Iberia Airlines flight last year, but I think we still don’t know what that was all about.