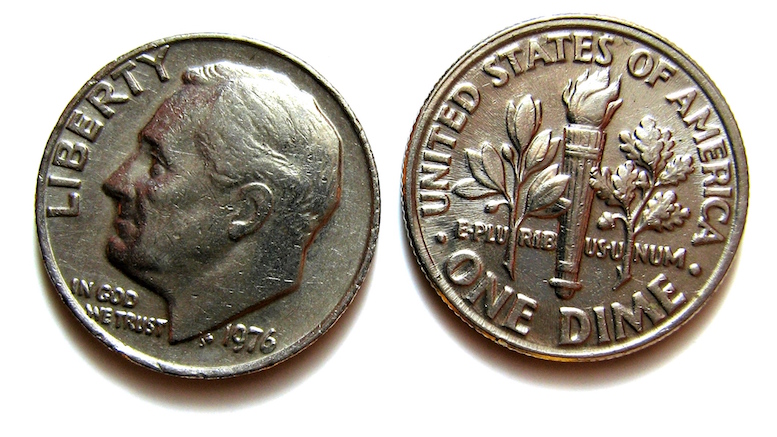 Oh, Wells Fargo. And here I had decided that you were the least evil member of the banking family.

You might still be—which is not saying much—but this is pretty bad.

Wells Fargo Home Mortgage fired Richard Eggers in July, citing new regulations that forbid banks from employing anyone who has been convicted of a crime involving dishonesty, breach of trust or money laundering. These regs were issued in May 2011 and February of this year, and were part of the response to the massive fraud schemes perpetrated by some financial firms and executives over the past several years, schemes that according to various estimates I just Googled have cost us maybe a trillion dollars.

In this case, they were used to justify the firing of a 68-year-old customer-service rep who put a fake dime in a washing machine on February 2, 1963.

Wells Fargo might want to check with Google re: ad placement

The word “fraud” apparently popped up in a background check run for Wells Fargo by a Florida company called First Advantage. That label is semi-truish, considering that Eggers was convicted of “operating a coin changing machine by false means” for using a cardboard cutout of a dime in a laundromat. That does represent an attempt to get something by (arguably) deceptive means, and so you could call it “fraud”, although I think it’d generally be called “theft of services,” and in a universe that made sense it’d be called “get the hell out of my laundromat, kid” and then forgotten. Also, at 19, Eggers was technically an adult at the time of the offense (49 years ago). And we should also remember that although a dime may not seem like much now, the value of that 1963 dime today would be 75 cents. That I guess is the case in favor of strictly applying the new regulations to this particular matter.

The case against it would include, among other things, the repeated non-prosecutions of firms and executives who pocketed billions via what were admittedly somewhat more complicated schemes.

“On the face of it, these situations seem unfair,” Sen. Chuck Grassley, R-Iowa, said in a statement.

Gee, Chuck, you think so?

“The public [he continued] is right to question why top executives aren’t being held accountable, especially when banks themselves are using federal regulations to justify firing rank-and-file workers.”

According to the report, before the regs were changed, banks generally gave employees a pass on things like “minor traffic offenses and some other misdemeanor arrests,” but that has now ceased. This is either because the fines for non-compliance have been raised to $1 million a day so the risk is just too great, or maybe because it’s an easy way to get rid of people and cut payrolls in tough times. (Times so tough, in fact, that Wells Fargo paid its top execs a mere $43.7 million in bonuses recently.) There is a waiver process, but it takes up to a year to be approved if you spent even one day in jail, as Eggers did during the Kennedy Administration. According to an attorney who represents people terminated for ancient offenses, executives get help with the waiver process but low-level workers just get the FDIC’s phone number on their way out the door.

Eggers will now be dependent on Social Security, assuming he didn’t sock away piles of money while he was pulling down a cool $29k a year as a customer-service rep. He regrets his criminal past, but suspects that may not be the real reason he was let go. His wife appeared to agree. “His only crime was being a teenager and being stupid,” she said, conveniently omitting his conviction for deceiving a washing machine with a fake dime half a century ago. “If that’s a crime, we’re all in big trouble.”

It just struck me that under the circumstances, maybe Wells Fargo classified this as “money laundering” rather than “fraud.” I’d like to think that it did, so I’m not gonna dig any further.

Has Your Boss Ever Pooped In Your Lunchbox?