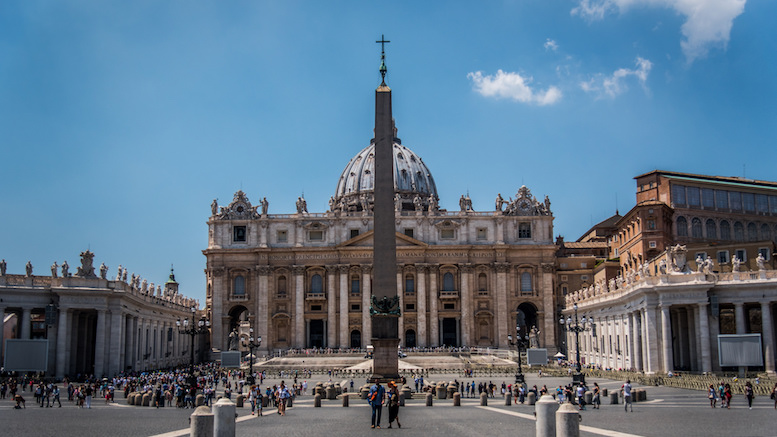 Maybe he's fed up with that column blocking the view from his office (photo: Kamil Porembiński via Flickr)

Oh, you wanted details. Okay, well, there are some of those.

As I’m sure you’ve heard, Pope Benedict XVI said today that he will resign the papacy as of 8 p.m. on February 28. He is 85, and says he’s just too tired to carry out his duties. (For more than a year he has been using a motorized platform to get to the altar in St. Peter’s because the 100-meter walk is too exhausting.) Most popes have resigned only by dying, but there is precedent for premortem papal disinvestiture (a phrase I just invented and trademarked), and the church’s canon law expressly authorizes it.

I first looked this up on Wikipedia, but then realized I should go to the Vatican’s website instead, because it’s infallible. According to an article there, at least five of the 260 popes to date have resigned: Pontian, in 235; Benedict IX, in 1045; Celestine V, in 1294; Gregory XII, in 1415; and Gerald VII in 1723. There may have been more, but there is decent evidence for each of these, except for Pope Gerald who I just made up. Citing the Catholic Encyclopedia, Wikipedia says Marcellinus (308), Liberius (366) and John XVIII (1009) may also have resigned, but the evidence for these (and maybe also Pontian) is not so great.

Benedict IX was apparently the Grover Cleveland of the papacy, as he served at least two non-consecutive terms. (He may also have been the Bill Clinton of the papacy, but accounts vary.) Sources say he not only resigned but in fact sold the office to his godfather, who said he just wanted to get Benedict out in any way possible. The godfather, who became Gregory VI, supposedly was then persuaded to resign himself after it was pointed out that buying the office was illegal. Benedict then came back for a while, but that didn’t last.

Celestine V was a hermit who was elected to break a three-year deadlock. Hermit-to-Pope seems to have been too big a jump for him, although it would make a great reality show, and after six months he said he wanted to resign. There was apparently some debate at that time as to whether it was legal or even possible for a pope to resign, which Celestine settled both by looking to precedent and by pointing out that the supreme authority in the Church, which was him, declared that indeed it was legal. (He was succeeded by Boniface VIII, who you may remember was mentioned, and not at all favorably, in Dante’s Inferno.)

It was after this event that they codified the practice of resignation. Under Canon Law 332, § 2, “If it happens that the Roman Pontiff resigns his office, it is required for validity that the resignation is made freely and properly manifested but not that it is accepted by anyone.” That probably reads better in Latin, but the point again is that the law says a pope can resign if he wants to resign. Not that it needs to say that.

The last pope to resign was Gregory XII, in 1415. This was at the time of the Great or Western Schism, when there were rival popes in Rome and Avignon. (Obviously there had been rival popes before, but this split lasted much longer than most.) Ultimately, a church council agreed that the guy in Avignon was not legitimate and Gregory XII agreed to resign, which cleared the way for a new and undisputed pontiff who was elected in 1417.

It generally takes a lot longer than two weeks to elect a new Pope, so the throne will be vacant for a while. (There is no Vice-Pope, apparently.) During this time, canon law says that “nothing is to be altered in the governance” of the church, and it appears that the Roman Curia (the staff) is to run things until the cardinals can get together and pick somebody new.

This probably won’t come up again for a while, hopefully, but if you’re still alive when it does, you’ll know.