One of my legal-writing pet peeves is the standard opening paragraph or two that just repeats everything that is up in the caption anyway, plus maybe some “hereinafters” followed by definitions that the reader doesn’t really need. That’s why I love this order by U.S. District Judge Steven Merryday in Tampa. (It was issued last August, but better late than never.)

The plaintiffs had asked for leave to exceed the 25-page limit, but then filed a 29-page (proposed) motion anyway two hours later. The judge refused to let them file it, and suggested that with a little “informed editorial revision” they could easily bring this thing in under 25 pages “without a reduction in substance.” Then he showed them how that might work by marking up their first paragraph: 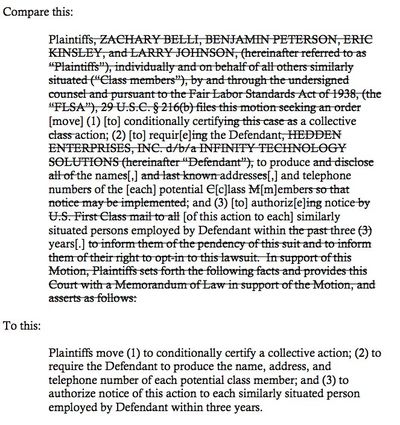 All that other crap is unnecessary. Leave it out!

Another Lawsuit Fails to Unseat Obama