The New York Times is reporting that the Senate has voted 63-34 to approve the nomination of John Brennan to be CIA Director. Brennan's nomination had been held up by the 13-hour filibuster of Sen. Rand Paul, who thought it would be nice if somebody would answer the question whether "the President has the power to authorize lethal force, such as a drone strike, against a U.S. citizen on U.S. soil, and without trial." The previous answer, "not currently planning to do that but we'll let you know, and Remember Pearl Harbor," was not quite what he was looking for, although for some reason people like John McCain and Lindsey Graham thought he should shut up and accept it.

Turns out the Attorney General, who as you may recall is an ATTORNEY and the top law-enforcement official of the United States of America, didn't understand the question. Or, as he claimed in a letter to Sen. Paul this morning, it had "come to his attention that you have now asked an additional question": 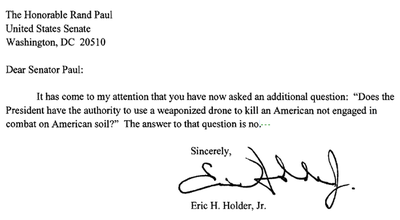 "Does the President have the authority to use a weaponized drone to kill an American on American soil" without a trial was the question all along, in my view, and so I thought the reference to September 11 (presumably a possible shoot-down) in the previous letter was BS. (Still baffled by the Pearl Harbor thing.) That'd just be action in defense of a third party, something that anyone could do legally under the right circumstances. The difference, of course, is that you or I might have our actions reviewed by a court, something the administration has fought tooth-and-nail.

So anyway, now we have a "no" to that question. Or … would it be entirely paranoid to say that we actually don't?

It probably would be going too far to say that by referring specifically to "weaponized drones" he has carefully reserved the right to kill us with something else. Whether it's a drone or a bullet or a crowbar or lengthy exposure to the music of Ke$ha, the point is whether the target gets due process. But it still does bother me that he added "not engaged in combat" to the question before he answered it. "Combat" is better than "terrorism," I guess, but given that some see the homeland as just another "battlefield" in the "War on Terror," this qualification remains creepy, at least to me.

Having seen how these people tortured the word "imminent," I think there's at least some reason for concern.

Trademark Denied Due to Scandalous Implication of Rooster Lollipop