You may remember Larry Craig as the senator who pleaded guilty to disorderly conduct after he allegedly propositioned an undercover officer in an airport men's room. Now you may also remember him as the former senator who argued that it was proper to use $217,000 in campaign funds to pay his legal bills stemming from that incident.

Craig's lawyers argued earlier this month that the trip was within the scope of his official Senate duties because he was traveling between Idaho and D.C. at the time, and since the bathroom incident and alleged propositioning occurred during said trip, the legal fees incurred as a result of said incident could be said to have been related to the performance of official Senate duties.

What's that, Your Honor? Did we tell the members of the Senate Ethics Committee in 2007 that the same incident was "purely personal conduct unrelated to the performance of official Senate duties"? Well, I personally did not tell them that, Your Honor, if that's what you—I see. Yes, Your Honor, now that you mention it, that does not seem entirely consistent with the position the former senator is taking today. Let me simply say these few additional words to make it appear to the casual observer that I may have had some sort of response to that, and now I'll be seated.

The Idaho Statesman's editorial about this news included the advertisement below for "Bad Idea" T-shirts, which I thought was either a nice touch or a pretty great coincidence. 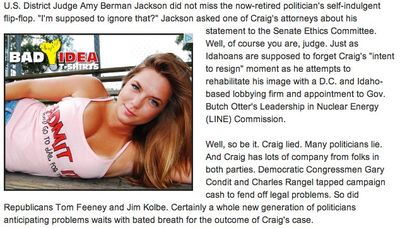 Previously, Craig argued to the Minnesota Court of Appeal that while he denied tapping his toe to signal the man in the next stall that he wanted sex, if he had done so that would have constituted "expressive conduct" and therefore speech protected by the First Amendment. The Court of Appeal responded that if that did constitute speech, it would have been "intrusive speech directed at a captive audience," which the government may prohibit.