The world seems somehow different now that Robin Williams is gone, and although any departure changes the world to some extent, this one has affected me (and, clearly, many others) a lot more than most celebrity departures do. He seems to have been very genuine and kind, in addition to being such a genius at what he did. I hope he experienced some part of the happiness he created.

Obviously that sort of paragraph is not really my "thing," and maybe I should have stuck with the six words I came up with last time, but there it is.

Still, life must go on, or should, at least, and comedy and tragedy have always gone hand-in-hand to some extent anyway. Which you wouldn't expect because on the face of it those two really don't seem to have anything in common, so maybe they should break up so the rest of us don't have to keep hearing about their relationship problems all the time. On the whole they seem to be making it work but it can really be $%*#ing annoying.

So, as we try to move forward, which as you may have guessed is what I am trying to do, let us begin, shall we, with the simple joy of watching a burglar fail to get through an unlocked door after pulling on it for seven minutes though it was clearly marked "PUSH": 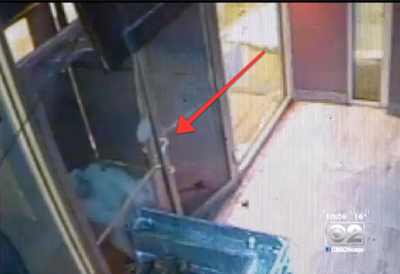 The journey of a thousand miles begins with one step. One must get through the door to begin, however.

Canadian MP Apologizes for Suggesting Canada “Embarrass” the US