Via the mugshot masters at The Smoking Gun: 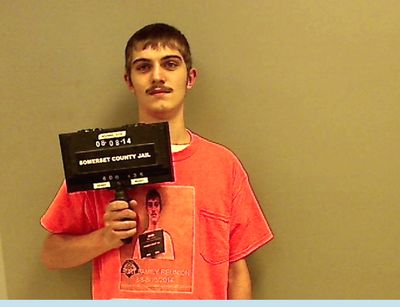 Yes, that's an earlier mugshot of the same person on the T-shirt he wore for this mugshot.

A co-worker made this T-shirt for the young man after he was arrested in June for drunk driving. At first I thought he had been arrested a second time while wearing a mugshot from his earlier crime, but it isn't quite that good. He pleaded guilty to the DUI charge and was sentenced to a couple of days in jail. After he was told to report back in August, the co-worker then made the T-shirt, which also bears the words "BURT FAMILY REUNION 8/8 – 8/10/2014," which The Smoking Gun says "is an apparent reference to an incarcerated Burt relative." Mr. Burt then deliberately wore that T-shirt when he showed up at the jail.

I don't know whether a second mugshot at that time is standard procedure, or whether the corrections officers just wanted to take it so they'd have the photo. Burt later wrote on Facebook that the officers thought the shirt was hilarious ("they laughed there asses off haha"), and that they asked him to hold the slate up so the mugshot would show in the photo. "Probably the best mug shot ever haha," he later posted.

Probably, but I have no doubt that his co-worker has already made him a new and even more meta T-shirt, and that he will shortly be wearing that in an even better mugshot.

DOJ: Opponent’s Use of 12-Point Font “Prejudices the United States”