Although such items can certainly be terrifying, in this particular case an appellate court in New Jersey decided that throwing one at a corrections officer did not constitute “attempted assault with a weapon.”

According to the report (thanks, Robert), Gerald Lovelace is currently serving a prison term in Bayside State Prison for some other sort of weapons charge. After his wife visited him in 2012, an officer noticed that he was wearing a wedding ring, an item that inmates are not allowed to wear (not sure why, but I can think of a few good reasons). The officer demanded that he turn it over, which he did—by taking it off and throwing it at her. A hearing officer ruled that this was “attempted assault with a weapon,” and Lovelace appealed.

The appellate division found this to be a pretty easy case, given the administrative code’s definition of “weapon,” which is “anything readily capable of lethal use or of inflicting serious bodily injury.” This includes (but is not limited to) firearms, knives, and “billies, blackjacks, bludgeons, metal knuckles, sandclubs, slingshots, cesti or similar leather bands studded with metal filings or razor blades imbedded in wood….” That part is based on New Jersey’s statutory list of prohibited weapons, and I’m sure that like me you now have two main questions: (1) does this mean I can’t bring my cesti into New Jersey, and (2) have I been using the wrong Latin plural form of “cestus” all this time?

The answers are (1) yes, unless you have an “explainable lawful purpose” for possessing one, and (2) how am I supposed to know what form you have been using? I have enough to do without following you around and checking on your noun declensions, pal. But I do think the state department of corrections got it wrong, and so has included girdles on its list of dangerous weapons.

“Cesti” is clearly intended as the plural of “cestus,” an English form of the Latin cestus or cæstus. In Roman times this was the word for a sort of boxing glove made with leather straps wrapped around the arm and hand, and often fortified with something nasty, like the metal plates you can see depicted in this sculpture (“The Boxer of Quirinal”). Seems like “metal knuckles” would probably cover this kind of thing, but just to be sure New Jersey has specifically included the “cestus” in its list of prohibited weapons.

Although the administrative code’s list tracks the one in the statute, because of the way the former is written the drafters needed to use the plural form of the nouns. And while I am not an expert in Latin, it looks like they may have gotten that wrong, so that arguably they have prohibited inmates from possessing marriage girdles, not boxing gloves.

I’m fine with that too. I just wanted to point this out.

Whoever contributed to the Wikipedia page on “cestus” seems to be irritated that people are getting this wrong, as he or she points out that “[t]he Latin plural is cæstūs (not cæsti, since [it] is a fourth declension noun)….” The problem here is that the word cestus also meant “girdle” or “belt,” most famously the magic belt of Aphrodite that could make someone fall in love with you. The word was presumably adapted to describe the Roman boxing glove because that was also made by wrapping something around a body part, but that word has a different “declension” in Latin (all the endings are different). It is also masculine, not feminine like the word for “magic lady belt” was. The difference is pretty significant, as explained here in a note to an 18th-century translation of Ovid’s “Metamorphoses”: 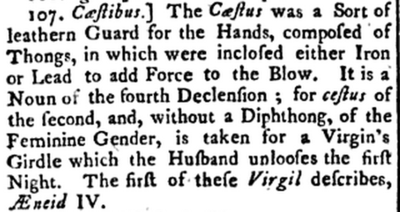 So by using cesti (the second-declension plural), a legal-humor blogger might argue, the New Jersey Department of Corrections failed to prohibit dangerous boxing gloves but did preclude any inmate from possessing “a Virgin’s Girdle which the Hufband unloofes the firft Night.”

Again, totally okay with that. Just suggesting a clarification.

What was this post about again? Oh, right, wedding rings. Like I said, the New Jersey court didn’t find that one difficult. Wedding rings are not listed in the definition, of course, and “while there may be some rare and extraordinary circumstance in which a wedding band is capable of being converted into a weapon,” the court found, “such an object is not readily capable of lethal use or of inflicting bodily injury….” Gerald Lovelace is therefore off the hook on that charge (but still in prison).

I look forward to hearing from Latin speakers and/or members of the New Jersey Department of Corrections on this one.

When Questions From the Jury Are a Bad Sign