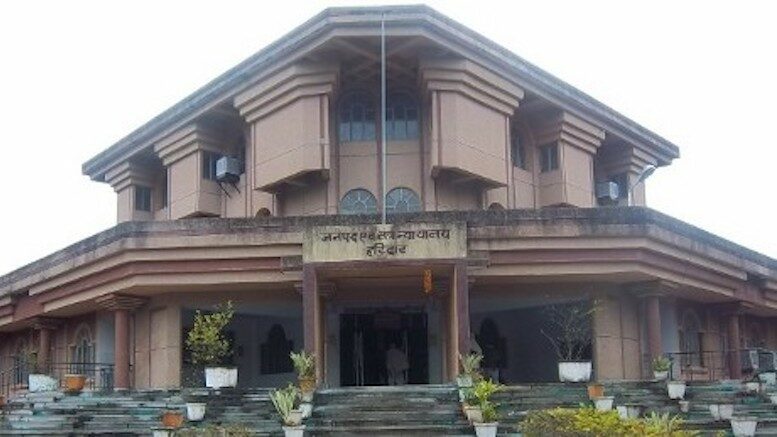 Haridwar District Court, Uttarakhand, India, where this case is pending (image: its website)

According to numerous reports (The Guardian, Times of India), a couple in India has sued their son, alleging that they spent 50 million rupees on raising and educating the boy and ultimately paying for an expensive wedding, and yet after six years of marriage no grandchild has been forthcoming. Their petition demands either the production of one (1) grandchild within a year or reimbursement of the aforementioned 50 million rupees (about $650,000).

Sanjeev Prasad told the Times that in addition to spending money for their son’s basic upbringing and education, the couple had paid for him to take a pilot-training course in the United States in 2006, only to have him return the following year without a job. Prasad said he supported his son financially for the two years it took the boy (now presumably a man) to find a job. After a few years, Prasad said, “we decided to get him married … with the hope that we would get us a grandchild to play with in our retirement age.” This involved more spending, including a wedding at a five-star hotel, a new car, and money to pay for a honeymoon abroad. That was in 2016.

“However,” Prasad said, “almost six years have passed and there is no child. We are facing immense mental harassment.”

The couple’s lawyer, Arvind Kumar Srivastava, said he believed the case was the “first of its kind in Uttarakhand,” the state where it was filed, “and probably the country.” Well, maybe Uttarakhand. But “the country”? Assuming he means the current state of India—

—it seems pretty unlikely that any case filed there today would be the “first of its kind.” Not impossible, just really super-unlikely.

The lawyer also said that “from the parents’ point of view, their demand is justified,” which I’m sure is true, and that “their expectations aren’t wrong,” which is almost certainly false.

P.S. According to the NJDG, there are 36,676 civil cases in India’s district courts that have been pending for more than 30 years, the oldest of which has been pending in the Hoogli district of West Bengal since 1951. I don’t know what that case is about, but there’s a hearing set for June 3 that has to do with “payment of costs.” If anyone is in the neighborhood then and could sit in, I’d sure like to know what the bill of costs is for a 71-year-old case.