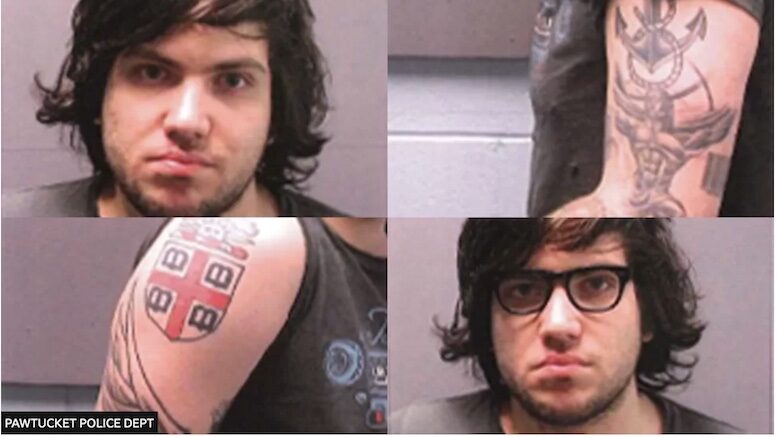 A Scottish court has found there is reason to believe that a man calling himself “Arthur Knight” is, in fact, U.S. fugitive Nicholas Rossi. The court rejected the alleged Knight’s many arguments to the contrary, including his claim that the reason he has distinctive tattoos identical to Rossi’s is that someone snuck into his hospital room and put them there while he was unconscious.

U.S. authorities have been looking for Nicholas Rossi for some time. He is wanted in Utah for a rape committed in 2008, and faces charges in other states as well. According to the BBC, for years Rossi had been living as “Nicholas Alahverdian” in Rhode Island, “where he was involved in local politics and was a critic of the state’s child welfare system.” But in December 2019, “Alahverdian” announced he had late-stage non-Hodgkin’s lymphoma, and a few weeks later, news outlets reported that he had died. A woman claiming to be Alahverdian’s wife had been calling them to report his death, and “the Alahverdian Family” posted this touching online obituary describing their beloved Nicholas as a “warrior for those without a voice” and “beloved community leader” who died surrounded by loved ones after uttering the noble last words, “fear not, and run toward the bliss of the sun.”

I probably shouldn’t say this, but if my last words are reported to be anything of that kind, you can be quite sure that I have faked my own death. That’s what authorities say Rossi/Alahverdian did, going so far as to make his own funeral arrangements before police found out and told the priest he could probably keep that slot open. By then, the beloved community leader had vanished.

He was believed to have fled to Scotland—which would have been in the same general direction as the sun if he posted that obituary in the morning, so maybe that’s what he had in mind—but authorities had been unable to find him. Then, in December 2021, a man named “Arthur Knight” suffering from COVID-19 was admitted to a Glasgow hospital. The reports don’t explain how hospital staff came to believe this man was wanted by authorities, but suspicions were confirmed by pictures of Rossi’s distinctive tattoos, which also appeared on Knight’s body.

The suspect flatly denied this in a BBC interview in March, but reporter Steven Godden was having none of it:

When I interviewed him … in Glasgow, he was in a wheelchair, his voice competing against the hiss of an oxygen mask. He says he is not Nicholas Rossi…. In fact, he claims he has never even been to America.

“I’m Arthur Knight and this is my wife Miranda Knight,” he told me.

He claims to have got married in Bristol two years ago and produces a wedding certificate.

But there is no birth certificate in his pile of documents. He claims this is a consequence of being adopted in Ireland before moving to London in his teens.

I tell him that the story he is telling me has been dismissed as a load of rubbish by the US authorities and that they are sure he is Nicholas Rossi.

“Then I would invite them to prove it,” he says.

Godden promptly brought up the allegedly distinctive tattoos, but the man denied having any. He was, unfortunately, not in a position to confirm that to Godden at the time, however:

“That’s not true,” the man claiming to be Arthur Knight tells me, but when I ask to see his left forearm for evidence of tattoos, he refuses.

“Honestly, I’m exhausted,” he says. “If you really want to you could see me pulling up both sleeves tonight. It’s nothing personal, I’m just exhausted.”

Typical media tactics, to spring a request like that on a man you know is ill at a time when he is too exhausted from his struggle with COVID even to pull up his own sleeves! Have you no shame?

On the other hand, the same article notes that Rossi’s adoptive father (in the U.S., not Ireland) had definitively identified him after seeing “Arthur Knight” in a TV interview. “That’s my son,” David Rossi said. But what does he know?

The alleged Knight was still denying all this in July, when he was brought to court again, this time on charges that he had been threatening staff at the hospital (where he was somehow allowed to remain despite obviously being a flight risk). “That’s not true!” he shouted, after the prosecutor pointed out Knight’s fingerprints also matched Rossi’s. If the suspect explained what was untrue about this, the report doesn’t mention it. Maybe he wasn’t able to, because it says proceedings had to be halted “when Mr. Knight became agitated after his oxygen appeared to run out.” (The State produced medical reports in which doctors say “there is no concern related to his lungs” and that he has been faking seizures.)

Asked by a reporter if “the game [was] up,” the suspect replied, “The game is afoot!” although in fact the game was immediately remanded into custody while extradition proceedings continued.

That more or less brings us to last week, when an Edinburgh court held it was more likely than not that “Mr. Knight is indeed Nicholas Rossi.” During this hearing, the suspect claimed his fingerprints had been “meddled with,” though again the report sadly lacks details about this intriguing claim. It does mention that he now conceded the tattoos existed, but had a perfectly good explanation for them: “He claimed that he had been given distinctive tattoos matching those on the arms of Rossi while he was lying unconscious in a Glasgow hospital in an attempt to frame him.” Who might have done this, what their motive was, how good the duplicates were, how long this took, why it didn’t wake him up, and why no one noticed that a patient was being tattooed, are just a few of the details the BBC again frustratingly has left out (along with who “Mrs. Knight” might be and how Arthur Knight explained why he signed that marriage certificate using the name “Nicholas Brown”).

We are told that “Rossi’s accent also changed several times while he was giving evidence,” which probably didn’t help.