A new federal courthouse is being built in Austin, Texas, and a groundbreaking ceremony was held on September 2 that attracted numerous dignitaries.  The group assembled for the ceremonial portrait below included two district judges, two magistrate judges, four U.S. representatives and a former mayor. 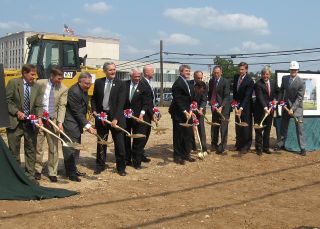 There was also this guy: 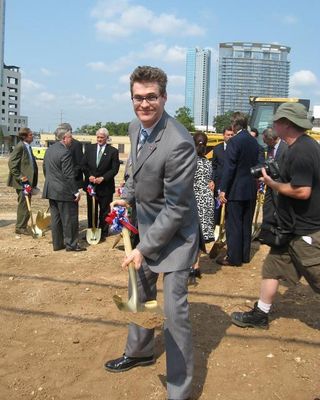 This is George Lobb, a graduate of the University of Houston Law School.  George passed the Texas bar, got his license in May 2008, and has since been doing (among other things) criminal-defense work.  He has handled a number of federal cases by appointment, and also has cases pending in state court.  George can be seen in the group picture on the far right, wearing a white hardhat.

He had no official role in the ceremony whatsoever and had not been invited to be in the picture.

The ceremony, which appears to have been open to the public, was attended by about two hundred people, according to the Austin American-Statesman.  A tent was set up, speeches were made, and the dignitaries then moved to the site of the future courthouse for the formal groundbreaking.  So did George.

You may be speculating that, moved by the speeches, George was caught up in the moment and impulsively decided to participate.  You would be wrong, because he brought his own equipment.  The reason no one else is wearing a hardhat is that George brought his own.  He also brought his own shovel, though not the one he is pictured with above.  (His was painted orange and white, and he asked the judges to sign it.)  When an organizer saw him with that shovel, she apparently assumed he was an official dignitary and handed him one of the beribboned gold shovels that were to be used in the picture.  "She didn't know who he was," said U.S. Magistrate Judge Andy Austin, "and didn't want to risk offending him by asking."  Probably for the same reason, nobody said anything when George lined up for the picture.

Judge Austin soon realized there had been an interloper.  "The night after the groundbreaking," he was quoted as saying, "I was watching the news and I saw a shot of the group.  I was like, 'What the hell was he doing in there?' . . . It was almost like this Forrest Gump thing."  He was not amused.  "I was annoyed that he did it.  It's going to be the photograph that you kind of look back on."  (It is certainly going to be the photograph George looks back on.)  Judge Austin went so far as to alert the authorities to the possibility that George may have kept his ceremonial shovel — which, as you will recall, he was given by an official — and it appears that he had.  Agents were dispatched to retrieve it.

There was no indication as to whether other dignitaries were offended or amused by the party crasher.  Judge Austin was the only one quoted as being in the former category.  Public comments to the piece on the Statesman's website are unanimously supportive of George.  Several said they thought he had earned the golden shovel and should get it back.  Also, this is a public building, said another, so "any citizen [who] showed up with a shovel should have been allowed to line up and dig in."  The worst thing any commenter suggested was rubbing George out with Photoshop.  And of course "Kanye West" was there:  "YO GOLD SHOVEL DUDES, I KNOW YOU JUST BROKE GROUND AND ALL, AND IMMA LET YOU FINISH, BUT OBAMA HOLDING A LIGHTSABER WAS THE BEST PHOTO-OP OF ALL TIME!"  He's commenting on everything these days.

George, meanwhile, has been keeping a low profile.  Hopefully, all the judges will see the humor in this.  Around here, we always tell new lawyers to "take some initiative," "be a self-starter," and so on.  Here's one that actually did it.  He may be getting some interesting appointments from the court in the near future, but that might be a small price to pay for, one day, practicing law in a courthouse that you actually sort of helped build.