If like me you don't speak German, that apparently means something like, "Is the Pope legally required to wear his seatbelt in the Popemobile?" Which frankly doesn't make a whole lot more sense than the original.

The report (and this one in English) says that, on behalf of an unnamed client in Dortmund, lawyer Johannes Sundermann sued Herr Joseph Ratzinger, now Papst Benedikt XVI, alleging that the defendant repeatedly violated German seatbelt laws during a visit to Freiburg in September. He says he can prove the papal violation by means of YouTube videos – always unimpeachable evidence – which he says show the defendant repeatedly violating the laws for more than an hour at a time. As a repeat offender, the suit claims, the defendant should face the maximum fine of 2,500 euros (or, presumably, an alternative currency if said euro no longer exists). 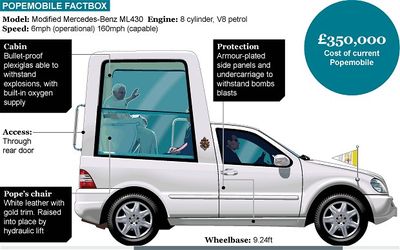 Pope not included.   (Picture: The Telegraph)

The Popemobile does have a seatbelt, and it should, considering that it is a Mercedes with a top speed of 160 mph that can go from zero to 60 in six seconds. But does the Papst wear it? Well, he has failed to do so before, as you can see in this YouTube video of him standing up in the back of the Papamobil while being driven around St. Peter's Square. Of course, he was at home there, and even if Vatican City has a seatbelt law he would probably cut himself a break on the ticket. I couldn't find the video that Sundermann claims is proof of the German offense. Either it has miraculously vanished or I didn't look at every last video of the Pope on YouTube – I'm not going to tell you what to believe.

Sundermann's client surely does not have standing to sue to enforce the seatbelt law, and even if he did the Papst would have diplomatic immunity as a head of state. Sundermann has apparently suggested that because the defendant is still a German citizen, that wouldn't apply, but that is another argument he would lose. Sundermann has also said, unsurprisingly, that the suit is intended to increase public awareness of the seatbelt law, and is not actually "an attack on the Church." Hope God feels the same way, because a false lawsuit against the Pope is probably an Eighth Circle offense, I would guess. I know that seems harsh but I don't make the rules.

Iraqi Shoe-Thrower to Get Early Release