Multiply this by about 1,000 to get an idea of the problem with our entire approach to security post-9/11.

Sorry—I meant 1,000 times the wasted money, although I imagine that 1,000 drunken jet skiers could wreak a lot of havoc before Homeland Security could do anything about it.

New York's JFK Airport is protected by a $100 million "state-of-the-art Perimeter Intrusion Detection System" employing cameras and motion sensors, but "protected" isn't really the right word because a 31-year-old guy strolled through it recently after his jet ski broke down offshore. Daniel Casillo swam to shore, climbed an eight-foot perimeter fence, crossed two runways and got into the terminal before anybody noticed him, and he was only detected (also not the right word) because he asked a Delta Airlines employee for help.

According to the New York Post, Casillo had been drinking with friends before deciding to go out on the bay, but got separated from them after darkness fell. When his jet ski broke down, he had to swim to shore. The report says that he swam a distance of three miles, but that's probably not right because (1) no human being can swim that far, or at least I can't; and (2) at three miles from the airport he would have been closer to shore by going a different direction (although maybe he needed to swim toward the lights). We know he ended up talking to a puzzled Delta employee near Gate 10, and the red arrow below is a distance of about a mile (assuming a fairly direct route). 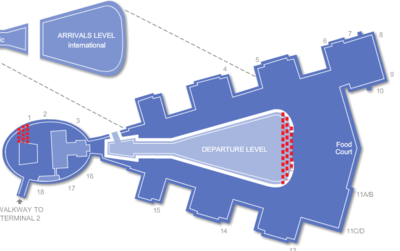 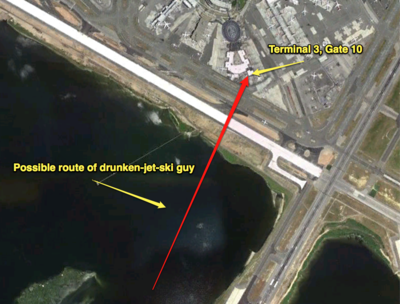 More important than the distance, of course, is that this line cuts across a perimeter fence, through a $100 million Perimeter Intrusion Detection System, across two runways and apparently also through at least one unlocked terminal door.

To be fair to security personnel, this does seem to have happened at night, a time during which security can be relaxed because terrorists are known to be afraid of the dark. On the other hand, this was not a trained terrorist infiltrator in ninja gear, it was some drunk dude in a bright yellow life jacket who wasn't even trying to be sneaky. He just wanted some help, which makes it seem especially unfair that once he identified himself he was arrested for criminal trespass. What was he supposed to do, run around outside the fence for hours trying to get your crack security team to notice him?

Officials are, of course, calling for an investigation into how this happened, and the Port Authority has said it is "stepping up patrols." (I guess there were also patrols.) That's all fine, I guess, but the real lesson is this: no matter how much money you spend and how many layers of security you establish, a really determined attacker will either find a way through them or (at best) pick a softer target—and you can't secure everything. By all means we should do simple common-sense things to increase security, and some of them cost money, but spending vast amounts on fences and electronic stuff (let alone the TSA, which I'm sure is insisting this was "not its job") just makes no sense at all.

Maybe we will learn that lesson this time, or maybe there will be line items in the budget next year for minefields and anti-jet-ski-infiltration patrols. Only time will tell.