Here's a more interesting decision by the Supreme Court, although maybe "decision" is the wrong word. The question is: if your client insists on filing something that is complete gibberish, do you have to agree, or do you  have an ethical duty to withdraw from the case?

Last October, the very respectable firm of Foley & Lardner filed a petition for certiorari in a patent case entitled Sigram Schindler Beteiligungsgesellschaft MBH, and that title is the most understandable thing about it. Here's the petition, courtesy of Josh Blackman, but just take a gander at this excerpt, if you dare: 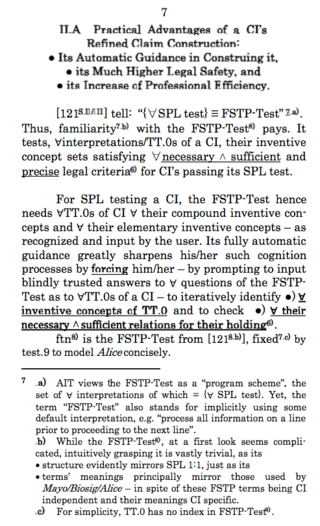 Oh, I'm sorry, I should have mentioned that it should only be viewed through a complex set of mirrors so you don't look directly at it. You didn't do that, did you? Shut your eyes, Marion! Don't look at it, no matter what happens!

Obviously, this is complete nonsense that should not have been inflicted on any court, let alone a supreme one. And, apparently, the author doesn't have the perfectly good excuse of being insane. That's why, after denying the petition, the Supreme Court issued an order directing the attorney who signed this thing to show cause why he should not be sanctioned for violating Supreme Court Rule 14.3, which requires petitions to be stated "in plain terms."

The lawyer's response (PDF via Legal Ethics Forum), written on his behalf by noted Supreme Court advocate Paul Clement, pointed out that the petition was basically written by the client, who had his own very strong and very ridiculous ideas about how the petition should be drafted. And what he created, and what the lawyer then filed, was, as Clement put it, "an unorthodox petition that clearly and faithfully reflects the views of the client, right down to the client's favored locutions and acronyms employed in his other writings about the patent system." The problem is that the client's favored locutions and acronyms are, if not complete bullshit, incomprehensible to anyone but him. His terms are not, to put it another way, plain.

So is his lawyer responsible for violating the Court's rule? What about his ethical duty of competence? (That's an actual rule; it's the first one, in fact.) In the lawyer's defense, Clement argued that here he had been caught between a rock and a hard place—that is, between his client's insistence on filing something stupid and his ethical duty as a lawyer not to do that. He chose to do what his client wanted rather than withdraw, and you shouldn't blame him for that, the response argued.

The Court didn't sanction him, but it did say that in the future, lawyers shouldn't expect to be able to blame the client for this:

A response having been filed, the Order to Show Cause, dated December 8, 2014, is discharged.  All members of the Bar are reminded, however, that they are responsible—as Officers of the Court—for compliance with the requirement of Supreme Court Rule 14.3 that petitions for certiorari be stated “in plain terms,” and may not delegate that responsibility to the client.

That's a slap on the wrist, and I'm a little surprised they didn't have a hearing on it just so they could all come down off the bench and punch him in the face one at a time.

Not many people seem to think he should have been sanctioned, or maybe they just think getting called out by the Supreme Court is sanction enough. Maybe. But I tend to think that if he had taken a hard line with the client, the client probably would have backed down and allowed someone to translate this crap into English. That's part of what lawyers are for, after all. If the client insists and you have to withdraw so he can do it himself, well, a time may come when you have to do that rather than break a rule. That's why they're called "rules." Granted, that may be a very difficult decision to make in some circumstances, but I don't know if those circumstances existed here.

I have a feeling that the lawyer in question now probably wishes he had shown this guy the door, but I'm just speculating.