New Chief Justice John Roberts has apparently decided not to follow the legacy of his predecessor William Rehnquist—at least in robe style. Rehnquist wore a robe with four gold stripes on each arm to indicate his status as the chief. But Roberts has appeared, at least so far, in the same black robe the associate justices wear. 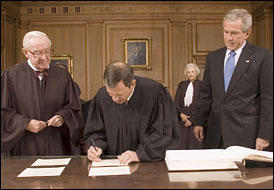 This picture shows the Chief Justice in his new, unstriped robe. He is also signing the paperwork to terminate Justice Stevens’s health benefits, which is why the President is looking on with such interest.