State Senator Gary Siplin was charged on April 10 with grand theft for allegedly misusing taxpayer money.  Since then, he has shown, shall we say, a lack of skill in dealing with the media.

He acknowledged to reporters this week that he should have simply said "no comment" to them last week when they showed up at his office after asking for a statement on the pending charges.  That would have been better, he thinks now, than running out the back door of his office and scaling a chain-link fence to get away.  When you talk to your new media advisor, Gary, he will probably tell you that if you are going to adopt that strategy, you should at least run fast enough to avoid being caught on film actually scaling the fence to get away: 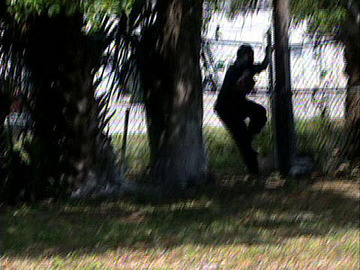 By Tuesday of this week, he had at least learned enough to have his attorney do most of the talking.  Surprisingly, Siplin’s attorney said his client admitted wrongdoing and was uncertain about his prospects.

Oh, wait, I read that wrong; apparently he "absolutely denies all wrongdoing associated with his campaign and the subjects named in the [indictment]," and is confident he will be cleared.

Siplin, who is also an attorney, did make a few comments to the media after his own attorney had finished.  Such as, "I love you, brother," which he repeated half a dozen times in response to reporters’ questions.  Asked whether he had anything to say to his constituents, he said that he loved them too.  Siplin had answered questions in the same way last July when questions first arose about transfers from his campaign account to a defunct business that he owned.  "I love you," he said in response to about three dozen questions.  "I love you."  Lacking any spirit of romance at all, the reporters seem to have kept digging.

U.S. Supreme Court To Consider Use of Expletives