Last week, Shannon Whisnant bought a barbecue smoker at an auction in Maiden, North Carolina (population 3,282).  When he got home, he discovered he had gotten more than his money’s worth when he found a human leg inside his new purchase.

Whisnant initially turned his prize over to police, and their investigation focused logically enough on John Wood, the owner of the storage unit where the smoker had been kept.  (The contents had been auctioned off because Wood could not pay the rent.)  Sharp-eyed investigators noticed that Wood happened to be missing a leg that fit the description of the one Whisnant had found.  It turned out that Wood’s leg had been amputated just below the knee after a plane crash in 2004, but he decided to keep it so he could eventually be "buried as a whole man."  (Or, more accurately, as a man with all of his parts in the same general area.)  It is generally legal to keep your parts after an amputation (surely you don’t think I haven’t done this research before), and so while it may be somewhat unusual for someone to keep said parts in a barbecue smoker inside a storage unit, Wood had done nothing wrong by doing so.

And he is hardly the first man to want to keep his leg around for sentimental reasons.  The most famous example is Major General Daniel Sickles, whose leg had to be amputated after he was hit by a cannonball at Gettysburg.  Sickles not only insisted on keeping the leg, he sent it (along with the cannonball he claimed was responsible) to the Army Medical Museum in Washington, D.C., where he reportedly visited it every year on the anniversary of its detachment.  You can see it today, along with other celebrity bones, at the National Museum of Health & Medicine. 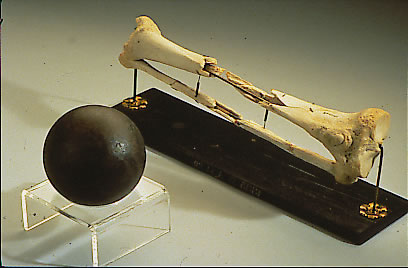 Wood’s leg will not end up in a museum, but you may be able to visit it, too.  Once police learned that they were not dealing with a "Silence of the Lambs" situation, they turned the limb over to a funeral home.  It’s not clear how Wood felt about that at the time, but he has since decided that he wants to be re-reunified with his leg, which now puts him at odds with Whisnant.  According to today’s reports, Whisnant (after calling every lawyer in the county looking for someone with experience in "cadaver law") has consulted a lawyer about his rights with regard to the leg.  His motive is financial.  It turns out that although Whisnant turned the leg over to authorities, he has been making good money with the empty smoker itself after putting it on display at three dollars a look (kids just $1).  At some point, a light bulb went on over Whisnant’s head, or at least the filament began to glow dimly, as he realized how much more the smoker might be worth with a leg actually in it.  "It’s a strange incident and Halloween’s just around the corner," Whisnant told reporters.  "The price will be going up if I get the leg."

But after consulting with his attorney, Whisnant has apparently decided that his best strategy for now is to persuade Wood that this is a good idea, so that the two can share custody of the leg and the resulting profits.

"He’s making a freak show out of it," Wood said, accurately.  "He wants to go on the Tonight Show and he wants to sell it to the National Enquirer and call Ripley’s Believe it or Not.  He wants to put money in his pocket with this thing."  Well, he wants to put money in both their pockets, but Wood says he is not interested.  "I just think it’s despicable," he said.  "I don’t mind having the 15 minutes of fame [for being the guy who kept his severed leg in a barbecue grill], but I’m not looking to really profit off this thing."  Wood has appeared in a charity golf tournament that benefited amputees, but otherwise has not exploited his leg’s new-found fame.

But is he really not interested in Whisnant’s idea, or just a hard bargainer?  Only time, and hopefully a very lengthy legal battle, will tell.

Link: WSOC-TV (Charlotte)
Link: Daily Telegraph (Australia) (which for some reason has much better details than the NC report)

UPDATE: Least Viable Consent Defense Ever Is Rejected by Jury